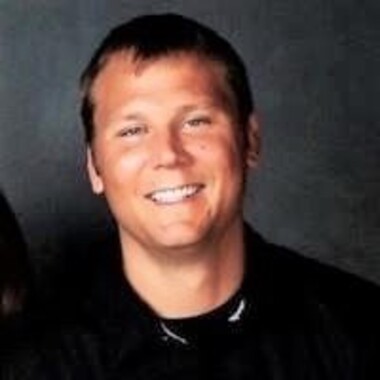 Back to Brandon's story

Berwick, Maine - Brandon W. Leveille, 44, loving husband and doting father of four, passed away Sunday, December 29, 2019 at Massachusetts General Hospital after a courageous, hard-fought two-year battle with a rare form of cancer.
Brandon is survived by his devoted wife, Heidi (McDonald) Leveille of Berwick, Maine; his four children, Chase,10, twins, Wyatt and Mia, 8, and Elise, 5, all of Berwick; his father, Clarence Leveille of Gloucester, Mass.; his sister, Jeannet Brown and her husband, Eric of Sanford, Maine; his mother-in-law, Marlene McDonald of Berwick; his grandmother-in-law, Thelma Hersey of Berwick; his niece and goddaughter, Hannah Brown of Sanford, Maine; and his godsons, Quinn Brooks of Arlington, Va., Zachary Mehr of Upton, Mass., and Nicholas Tarantino of Gloucester, Mass.
He was predeceased in death by three very special people: his mother, Yvonne Leveille, infant brother, Matthew Leveille, and father-in-law, John McDonald.
Born on March 31, 1975 in Gloucester, Mass. to Clarence and Yvonne (Berrett) Leveille, he attended Gloucester schools and graduated from St. John's Preparatory School in 1993. Brandon's lifelong passion for football began in his early years as an East Gloucester Viking. He was active in the community, a consummate entertainer and enjoyed returning home to Gloucester for the annual St Peter's Fiesta.
Brandon graduated from the University of Notre Dame in 1997 with a B.S. in Chemical Engineering and remained an avid "Domer" and fan of their football team. An accomplished chemical engineer, Brandon began his career in Cambridge, Mass. at Acusphere before joining Biogen where he spent 15 years working in the pharmaceutical drug development & delivery space. Renowned in his field for his in-depth knowledge of specialized process development methods, Brandon was most proud of his contributions in the direct advancement of enhancing quality of life for people battling Multiple Sclerosis, Rheumatoid Arthritis and Hemophilia. Most recently Brandon transferred to BioVerativ which now operates under the Sanofi Pharmaceuticals umbrella.
Brandon and Heidi were married on August 23, 2003 at the Sacred Heart Church in Portland, Maine. They were partners and best friends in every sense. A tradition he and Heidi started when they dated and continued to enjoy with their children, were cherished annual vacations to Newport, R.I. During their 20 years together, they first resided in Cambridge before moving to Maine to start their family in the seacoast community. Nothing made him prouder than when he watched his own children throughout their day. A family man in every sense of the word, Brandon loved coaching baseball, flag football and soccer for his children. He loved, spoiled, adored and supported his children and had a special bond with each one of them.
Quick to make you laugh, a loyal friend and a major sports fan, Brandon was a man who loved life and cherished his family and friends. He enjoyed going to the ocean, maintaining his lawn, golfing, and listening to Phish. One of Brandon's many talents was cooking which he developed from working summers at the Gloucester House. He was the master chef at home where his children particularly loved his chicken marsala. It was a rare day that Brandon missed listening to sports talk radio with a keen ear for the New England Patriots. Brandon was very honored to have the opportunity to co-host a sports talk radio show on WMEX.
What made him smile most was being with family, enjoying the family laughter and banter back and forth, teasing and telling his "tall tales", following the family traditions, and enjoying homemade meals surrounded by the people he loved most. He took pleasure in the successes of the people he loved.
Brandon never took pity on himself, instead he took what might have been considered a devastation and created a beautiful life for his family and himself. His life was an example of hopefulness, courage, and a "never-say-die" attitude.
This quote from Rudy Ruettiger (subject of the movie "Rudy") sums up Brandon's approach to life: "In life, it's not about how hard you get hit. It's about how many times you get back up and how hard you're willing to keep fighting for your dreams."
Brandon also lived his life according to the famous quote by Ferris Bueller, which he included in his high school year book, "Life moves pretty fast; if you don't stop and look around once in a while, you could miss it."
Brandon will be dearly missed.
The family would like to extend a heartfelt and sincere thank you to all the staff at Massachusetts General Hospital, but especially his doctor, Jacob Soumerai and the nursing staff on Lunder 9 for the compassionate care they provided to Brandon during his two-year battle with lymphoma. Many thanks are also being sent to the nursing team at the Seacoast Cancer Center and his home nurse, Christina, and physical therapist, Jessica, for the extreme kindness extended.
A Mass of Christian Burial will be celebrated Friday January 3, 2020 at 11 a.m. at Our Lady of the Angels, 160 Agamenticus Road, South Berwick, Maine.
A burial will be held at a later date at Mt. Calvary Cemetery, Somersworth, N.H. In lieu of flowers, please consider a contribution to the Leveille Family's College Savings Plan at https://go.fidelity.com/kcsw4 or checks can be made payable to: Fidelity Investments and mailed to P.O. Box 770001, Cincinnati, OH 45277-0015 (for memo line: account # 618315306).
Published on January 3, 2020
To plant a tree in memory of Brandon W. Leveille, please visit Tribute Store.

Plant a tree in memory
of Brandon

A place to share condolences and memories.
The guestbook expires on April 01, 2020.

Ann Marie Misuraca Stackhouse
I am so sorry to hear of Brandon's passing. He was my neighbor for many years and was always kind and funny. Sending positive thoughts and prayers to his family
View all