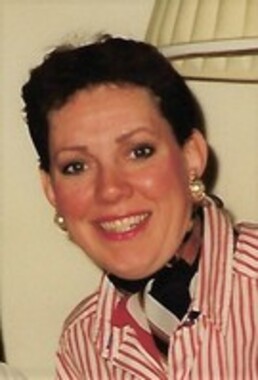 Gloucester - Bronwen (Burhans) McKenzie, age 64, loving wife of Jim McKenzie, passed away on January 11, 2020, after a brief illness. Daughter of the late Dr. Clinton Burhans and Barbara (Almstead) Stoughton. Born in Wisconsin and raised in Michigan, Bron had a wonderful childhood. She was an animal lover and had many pets throughout her life, including her horses, dogs and many kitties. Horseback riding and figure skating were a couple of her favorite activities during her youth. After high school she attended Michigan State where she was a Kappa Delta sorority sister. She made lifelong friendships with her sisters and had recently met many of them at a reunion at Michigan State. After college she joined Eastern Airlines as a flight attendant stationed in New Jersey, but after meeting Jim she transferred to Boston where she shortly joined the management team as a flight attendant manager. After Eastern she joined the Trump Shuttle as base manager of flight attendants. She was recruited by American Airlines and joined their management team and went on to become the passenger service manager and safety coordinator. She retired after 20 years with American Airlines. Bron loved working for the airlines. She loved to travel and was able to enjoy the benefits of airline life. After retiring, Bron and Jim (retired Revere Fire Captain) purchased a 33 ft. new sailboat (Firefly). Docked at Pickering Wharf Marina in Salem, they spent 4 wonderful summers living on their boat. They then moved to Gloucester and had two more fun years on the boat. Bron became active in the Gloucester Elks and served as Lodge secretary for seven years. Many lasting friendships were made during this time. Bron then went to work at Cruiseport Gloucester as Manager on the Beauport cruise ship. She then went to work at the Beauport Hotel boutique where she worked until her illness. She had many friends there who were very kind during her illness. Bron was a fun loving person. Always the life of the party, she could always be found either in the center of or behind the scenes of an affair. She will be missed by all who knew her.
Bron leaves her loving husband Jim, of 39 years; her mother Barbara Stoughton of Midland, Michigan; her brothers Clinton Burhans and his wife Rebecca and Michael Burhans, both of Michigan. Her uncle Jim Almsted and his wife Jan of Rochester, New York; also her brother-in-law Peter McKenzie and his wife Judy of Danvers, and many nieces, nephews and cousins. Her special friends Liz and Andy Kelly and their son Andrew and his fiancé Lucia of Paisley, Scotland; Jim's cousin Roddy and his wife Jen of Florida. She also leaves her two beloved Persian kitties that she adored with all her heart.
Bron was predeceased by her father, Dr. Clinton Burhans, her youngest brother Jeff Burhans; her dear stepfather Bud Stoughton; and her in laws Peter and Elizabeth McKenzie.

There are no visiting hours. Her Memorial Mass will be celebrated in Our Lady of Good Voyage Church, 142 Prospect St. Gloucester on Saturday, January 18, 2020 at 11 a.m. Family and friends are cordially invited. Burial will be held privately. A special thanks to the nurses and doctors of Beverly Hospital for providing such kind support during her illness. In lieu of flowers contributions may be made in her memory to: Cape Ann Animal Aid, 4 Paws Lane, Gloucester, MA 01930. Arrangements are by the Greely Funeral Home, 212 Washington St. Gloucester. Online condolences may be given at: www.greelyfuneralhome.com
Published on January 13, 2020
To send flowers to the family of Bronwen McKenzie, please visit Tribute Store.

Send flowers
in memory of Bronwen

Gynnine Giachetti Schiano
I worked with Bronwen at Eastern. She was kind, caring and a lot of fun. Prayers and condolences.
Michele Butler
So so sorry to hear of Bron's passing.....memories made at Daileys were good ones....I'm sure she'll be sorely missed...my deepest condolences to you, Jim.
Nancy Mortland
Prayers for Bron and her family. I met Bron at American Airlines. She was a lovely lady inside and out! She will be missed by all.
Julie Bonta Frayer and Sheila Straw

Blooming Garden Basket was purchased for the family of Bronwen McKenzie by Julie Bonta Frayer and Sheila Straw.  Send flowers

Patti and Rick LeBranti
Dear Jim, we are shocked and saddened to read of Bron’s passing. Although we haven’t been in touch in a long time, we always remember both of you with fondness. Please know you are in our thoughts and prayers and may God keep you in his care.
Susan Philbin
To the family of Bronwen. I’m so sorry for your loss. I flew with Bronwen at Eastern Airlines and worked with her at Trump Shuttle. We always had such a nice time, and I loved hearing her stories of her husband Jim’s career as a fire fighter. My thoughts and prayers are with you all.
Michael Shea
Bronwen was a lovely and wonderful person who on a wet and cold day a few years ago come to the aid of eight stranded Irish travelers and allowed us to return home. It was she who performed her magic and adjusted flights and hotels so as to allow our homecoming. Her sincere kindness shall never be forgotten. Condolences to Jim on the loss of such a lovely lady.
Bev Potts Osborn
Rest in peace Sunshine. I will always cherish the days we roared with laughter on many a jumpseat and how we nicknamed one of our airlines... The "Trout" Shuttle.
Ken and Stacy Rice
Our deepest condolences to Jim. We are very sorry to hear this sad news. She was a wonderful woman. RIP Bron
Cathy Ragusa Owen
With a heavy heart I am so very sorry to hear this sad news about such a wonderful lady.. She touch so many with her wonderful ways.. RIP my friend.. We flew together at Eastern Airlines.. Fly with the Angels!! Heartbroken..xxoo
Wesley Clogston
Bran was a wonderful person and a part time baker for us on the boat. She was a great person to work with, she will be greatly missed.
View all