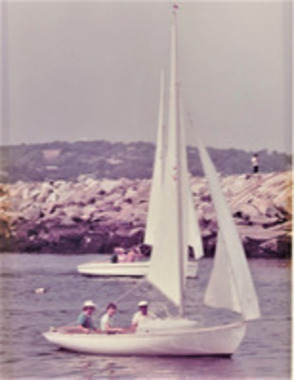 Rockport, MA - After a rich, long life, Daniel D. Karr, age 93, died on October 18, 2019, at Den Mar in Rockport. After more than 50 years on Summer Street in Rockport, Massachusetts, Dan and his sister Althea moved to The Residence at Riverbend in 2015. Althea died in 2017, and Dan recently moved to Den Mar, back in Rockport, where he enjoyed the return to the salt air.
Born in Newark, New Jersey, on July 14, 1926, to Alfred and Thelma Karr, Dan showed an early interest in nature. His education was interrupted by a call to World War II, where he served aboard the USS Chicago in the Pacific campaign, with the U.S. Navy. Dan returned stateside to complete high school in his early 20s. After working in New Jersey into the 1950s, Dan moved to Rockport, Massachusetts in his 30s to care for his mother. When he inherited his mother's home, he built an art studio for his sister Althea, and a wood-shop/darkroom for his own work. They shared the home on Summer Street for more than 50 years. Dan was a member of St. Mary's Episcopal Church, The Sandy Bay Yacht Club, The Thacher Island Association, The Chorus North Shore, and The Appalachian Mountain Club.
Dan sailed every fair-weather day at the Sandy Bay Yacht Club, where he served on the racing committee. He raced his Hereschoff Bullseye sailboat "The Dayspring" for 40 years, winning races well into his 80s. Dan was known for his good judgement on the water. He also manned the shuttle to Thacher Island. A lifelong member of the Appalachian Mountain Club, Dan climbed every mountain over 4,000 feet in the White Mountain National Forest at least once, and climbed many peaks more than once. Dan was a regular usher at St. Mary's Episcopal Church in Rockport. He was active in the Cursillo movement for much of his adult life. Dan sang in the Chorus North Shore for 50 years. Dan loved Cape Ann for the sea, for the forests, for the art community. His guidance changed the direction of many lives. Dan enriched his communities with his simple gifts of kindness, enthusiasm, inquisitiveness and joy. His big laugh was rich and infectious. This generous man will be deeply missed by his community in Rockport.

Memorial services will be held at St. Mary's Episcopal Church in Rockport on Saturday, November 9, at 11 a.m. The service will be followed by a reception. Family and friends are cordially invited. Arrangements are by the Greely Funeral Home, 212 Washington Street, Gloucester. For online condolences, please visit www.greelyfuneralhome.com.
Published on October 29, 2019
To plant a tree in memory of Daniel D. Karr, please visit Tribute Store.

A place to share condolences and memories.
The guestbook expires on January 26, 2020.