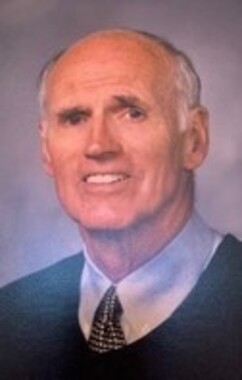 Gloucester, MA - David E. Harrison died on Sunday, December 1, 2019, at the Kaplan Family Hospice House in Danvers, Mass. He was 86 years old. David leaves his wife, Michele Holovak Harrison with whom he shared almost 50 years of marriage.
David graduated from Gloucester High School, class of 1951 and from Tufts University in 1955 where in addition to his studies, he played football, basketball, and lacrosse. Until recently broken, David held the record for decades for the most passes caught in a single game. He also played in many collegiate lacrosse all star games.
After service in the USA Army in Hanau, Germany, he returned to the United States, working first in NYC and Philadelphia. During that time David rekindled his interest in lacrosse, becoming an NCAA lacrosse official. He continued his collegiate lacrosse officiating and added high school and college football officiating. He was the referee at many Ivy League football games, including the Harvard Yale game, Yankee Conference games, the last Division 1 game between Boston College and Holy Cross and many others contests, including a football game between Villanova and the University of Rhode Island in October, 1989, played in Milan, Italy.
David enjoyed participating and watching sports, including attending three summer Olympic Games, the winter Olympic Games in Salt Lake City, Super Bowl Games, the Red Sox World Series, the Celtics championships, a Final Four game, and the exciting Muhammed Ali-Joe Frazer Fight at Madison Square Garden. David ran and successfully completed the Boston Marathon in 1996. He was a strong supporter of his daughter Lisa's many tennis matches at the Pingree School and Simmons College. He was a dedicated fan of the Massachusetts Special Olympics wheelchair track events where his son Michael competes annually. Continuing his interest in sports for all, David served as a member of the Bay States Games' volunteer board of directors for 25 years and in 2015 was inducted into the Bay State Games Hall of Fame.
Ever the Renaissance man, he also attended the Boston Symphony, annual trips to Tanglewood, the theater, participating for 37 years in a very special couples book group, and listening to his brother Dean sing.
David enjoyed Democratic politics, serving four terms as a member of the Massachusetts House of Representatives, and in 1968, was elected as Chairman of the Massachusetts Democratic Party. He also served as the Gloucester Democratic City Committee Chairman for many years, receiving its Lifetime Achievement Award in 2012. David helped coordinate national presidential campaigns as the New England coordinator for George McGovern in 1972 and in 1968, winning both the North Dakota and South Dakota primaries for Robert Kennedy. His liberal politics guided him and he held George McGovern as his personal hero, bringing Senator McGovern to speak at Gloucester City Hall in 2009.
During his tenure in the Massachusetts Legislature, Harrison earned his law degree from New England School of Law, and in 1988, he was appointed presiding judge of the Gloucester District Court, a position he held for 14 years until his retirement. David was especially concerned with domestic violence and co-chaired a judges committee to establish various programs to confront this issue. It was, however, the juvenile court that was most important for David. Each child learned that he or she had an opportunity for a second chance. David was an active member of a committee established through the Judges Conference to bring respect for the rule of law in other countries. He participated in rule of law conferences in China, Macedonia, Cuba, and Hungary, including teaching at a conference in Muscat, Oman. He and Michele were fortunate to have traveled extensively. It was their last trip to Barcelona in late May, 2019, where the brain tumor glioblastoma was discovered.
David received the Distinguished Services to Tufts, Profession, and Community Award from the Tufts University Alumni Association in 1991and the MIAA Distinguished Service Award in 1992. He served as a trustee of the Cape Ann Savings Bank for many years prior to his judicial appointment.
David had his strongest love and support for his family. He was predeceased by his father Lester W. Harrison, a long-time vice president of the Cape Ann Savings Bank; his mother Hazel O. Harrison, a registered nurse and Army veteran who cared for soldiers in WWII in England; his brother Dean W. Harrison; and his niece Jennifer Harrison McNamara.
He is survived by his wife Michele whom he met at the naming of the Robert F. Kennedy stadium in Washington, D.C., in 1969, and they were married the following February. He leaves his son, Michael Harrison of Beverly; and his daughter Lisa Harrison; and her wife Ivana Lucero, of Beverly, Mass. He also leaves his sister-in-law, Nancy B. Harrison of Gloucester; his nephew Dean W. Harrison; his wife Judith Clark and their sons Owen Harrison and Beckett Harrison, all of Pennington, New Jersey.

A memorial service will be held at the Beauport Hotel, 55 Commercial Street, Gloucester (complimentary valet parking is available) on Saturday, December 14, 2019, at 10 a.m.
Donations in David's memory may be made to the David E. Harrison Scholarship at Tufts University, 80 George Street, Medford, MA 02155. David initially funded this scholarship, which is specifically directed for financial assistance to Cape Ann students attending Tufts University. Arrangements are by the Greely Funeral Home, 212 Washington St., Gloucester. Online condolences may be given at www.greelyfuneralhome.com.
Published on December 4, 2019
To plant a tree in memory of David E. Harrison, please visit Tribute Store.

A place to share condolences and memories.
The guestbook expires on March 02, 2020.

Fernando Beltran
My most sincere condolences to the family.
Robert Ginsberg & Family
So sorry for your loss. We have such fond memories of David. Our thoughts and prayers are with the family.
Dick Wilson
If we exist as individuals on this earth and in life is to make a difference,Dave certainly succeeded.
He is a perfect example of a life well lived. Much love. Dick Wilson
Eileen Daley Kelleher
Michele and Family,
I'm so sorry to hear of David's passing.
David was a true gentleman. He was a wonderful person and friend.
He will be missed.
Marie Fleet Corkum
Dave was so well loved. But he gave back to his community and many people ...Hazel and my mom went to all the Democratic conventions together. Back in the sixties I was about ten, the annual Manchester clambake , and Robert Kennedy he got as the speaker...Priceless memories....One of Gloucester's greatest...
Anne Clarke
Such a great man and lovely person.
I know he will

He was a wonderful person ,very kind and loving.know he will be missed by many
Family and friends.
Pamela Marcaurelle
I am extremely sorry to hear about your loss. David has left an indelible impact on so many. Accept my sincere condolences.
Katie Rabbitt
Judge David Harrison was involved with me in the juvenile justice system when I started making poor choices as an adolescent. There were times where I felt absolutely powerless and that the world around me seemed hopeless. He gave me hope and the will to keep pushing to do the right thing.

When I was 14, I would be frustrated that my entire afternoon was spent waiting on a bench to be seen at the juvenile court. I asked him, "Why am I always the last one you see?" he told me, "because I know this isn't how you're going to live your life. You're smart and strong and your family is trying. You're going to make it out of this. You give me hope and I like to end on a good note." Those words st...uck with me. When life-altering choices later presented themselves, I remembered this moment and it influenced me to do the right thing. When it seemed like I was written off as a lost cause by many other members of my community, I felt he really listened to me and respected my input and tried to provide me resources. It meant a lot to know there was a powerful public figure that saw me in a positive light. If he believed that I could someday be more than I expected, then it was worth trying. I didn't give up hope and never stopped dreaming, and that was directly because of him.

I am now mid-30's and living the dream. If he hadn't been there for me at key turning points of my life, I know things would've turned out very different. He saved my life. The different avenues that I was able to leverage to work my way up were available because he didn't write me off as broken. The path I was on when he got involved has grim statistics. He couldn't save all of us in the juvenile system, but he undeniably saved me. There was no way I beat the odds, he pushed some of the odds out of the way. He had a brave heart to have so much love and patience for the broken and downtrodden. He set the standard for how someone can impact a person's life for the better by seeing them as people and believing in them and giving them chances to fail, learn, and grow. I am very thankful that he gave so much of himself to this work.

His involvement in my life broke a cycle of violence, so it also effected my daughters lives. His impact will be a legacy that will live on for generations. He made the world a better place by being kind, compassionate, and understanding in ways that will exponentially grow. We're very lucky to have had him touch our lives.

-Katie RabbittRead more
Michael Dailey
So very sad of hearing of your loss. Dave and. Dean such good men they will be missed. I counted them as friends
Ron Gilson
David Harrison was my high school classmate, my insurance man, my attorney, my judge. But most of all, he was my lifelong friend. I will miss him.
Ron Gilson
Norma Steele Parisi
Heartfelt condolences to his family. So many fond memories of Dave with my dad ,Owen ,and uncle ‘Simmy’ often bantering re: the politics of the day. A truly loved and admired son of Gloucester who aspired to such greatness. He will be missed.
View all