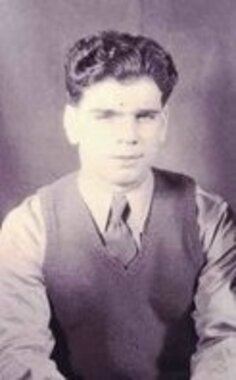 Gloucester - David J. Simon of Gloucester passed away on Wednesday evening February 6, 2019 on his 95th birthday at Gloucester Healthcare. He is the husband of the late Marilyn (Shorts) Simon.
He was born in Gloucester, son of the late Joseph and Mary (Moses) Simon. He was a graduate of St. Ann’s School and Bentley College.
Dave served in the military during WW II in France as a Sergeant in the US Army.
The majority of his working career was spent as Vice President of Operations for O’Donnell-Usen Fish Processing Plant in East Gloucester and at the Fort in Gloucester.
He was a member of the Holy Family Parish, St. Ann’s Church and the Legion of Mary of Good Voyage.
He is survived by his daughter, Mary Ann Straccia and her companion Wesley Dunn of Everett, his sons Joseph Simon and his wife Suzanne of Newbury, David Simon and his wife, Jody of Salem, NH, Paul Simon and his wife, Fran of Gloucester. his brother, Edward Simon and his wife Dorothy, his sister, Cecelia Simon of Gloucester. David is also survived by his grandchildren Vincent Straccia, Brian Straccia, Paul Simon, Jr., Kyle Simon, David Simon, William Simon, Joseph Simon, Tracey Lane and her husband Richard as well as many great-grandchildren and many nieces and nephews including his close and special niece, Elizabeth Phillips of Gloucester.
David was predeceased by his brothers Thomas, Earl and Joseph as well as his sisters Sally and Anne.
David’s Funeral Mass will be celebrated at Holy Family Parish in St. Ann’s Church, Pleasant St. Gloucester on Monday, February 11, 2019 at 9 a.m. Interment will follow in Calvary Cemetery. In honoring with his wishes there will be no visiting hours. In lieu of flowers donations in his memory may be made to a charity of one’s choice. For online condolences and register book please visit www.pikenewhall.com. The Pike-Newhall Funeral Home, 61 Middle St. Gloucester is assisting the family with arrangements.
Published on February 8, 2019
To plant a tree in memory of David J. Simon, Sr., please visit Tribute Store.

A place to share condolences and memories.
The guestbook expires on May 08, 2019.