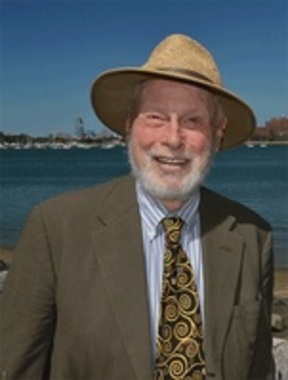 Back to Duncan's story

Gloucester - Duncan Morse Nelson of 115 Leonard Street, Gloucester, died on December 20.
Husband of Beatrice Kipp Nelson, father of Peter and Evan; and from his first marriage to Jean Richmond Parsons (dec.) Rowena, Lee, Perry, Burr (dec.), Eroica, and Skye. Brother of Elizabeth Burr Abetti (dec.), W. Evan Nelson, and George Anthony Nelson. Duncan is survived by 20 grandchildren.
Duncan was born in Durham, NC, lived for many years in Massachusetts, and was Professor of English at several universities, including 49 years at the University of Massachusetts at Boston, where he was Poet Laureate.
He delighted in writing and reciting poems for occasions – some several thousand, many of which celebrate his friends and family in Annisquam and Gloucester, and many of which will be donated to the UMB archives.
Duncan’s burial will be private; a Memorial Service will be held in June. Donations may be made in Duncan’s memory to the Duncan Nelson Butterfly Fund at UMass Boston and sent to UMass Boston, University Advancement, 100 Morrissey Boulevard, Boston, MA 02125-3393 or online at www.umb.edu/NelsonFund. For online condolences and register book please visit www.pikenewhall.com.

The Pike-Newhall Funeral Home, 61 Middle St. Gloucester is assisting the family with arrangements.
Published on January 10, 2019
To plant a tree in memory of Duncan Morse Nelson, please visit Tribute Store.

Plant a tree in memory
of Duncan

A place to share condolences and memories.
The guestbook expires on April 09, 2019.

Restore the guestbook to view the 6 more posts by family and friends, and share a memory or message of condolence of your own.