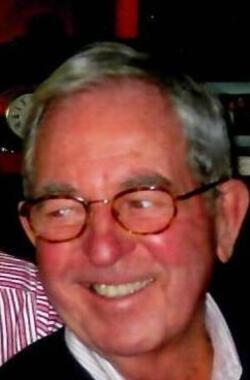 Back to Eugene's story

GLOUCESTR: Eugene H. Olszewski, formerly of Reading, died gently Christmas morning at Seacoast Nursing Home and Rehabilitation Center in Gloucester. Although he passed over before receiving his coveted 2018 Red Sox calendar gift, he did receive eternal life - a trade he would consider fair.
Eugene was born March 11, 1928 in Boston, MA to Eugene and Lucy (Sybicki) Olszewski. He grew up in Chelsea and later moved to Reading where he and his family lived for 55 years. He was predeceased by his wife Helen, to whom he was married for over 60 years, and son Glen. He is survived by his daughter, Debra, of Gloucester, a granddog, Clicquot, and siblings John of Georgetown, Ronald of Lutz, Florida, and Leona (McDonough) of Pelham, N.H.
He served in the U.S. Navy as an Electrician's Mate from 1946-48 and graduated from Northeastern University, attending classes in the evening through the G.I. Bill of Rights. He was employed by Boston Edison Company, now NStar/Eversource Energy, for his entire career and was a Manager in Credit and Collection. A lifelong member of the Wakefield Elks, he chaired many Veteran's benefits and volunteered at the Bedford VA on their bingo nights. He was passionate and meticulous about his property and yardwork, the results of which were the envy of many a neighbor. At different times throughout his life he enjoyed other hobbies as well - most notably golf, bowling and freshwater fishing. In his retirement years he and his wife enjoyed travel to many islands and destinations throughout Europe. A member of the John Paul II Foundation of New England, one of his proudest moments was a private audience with the pontiff in his Vatican chamber - something he was able to repeat again at a later time. Most recently he was elected President of the Resident's Council at Seacoast where he made and supported many new friends and advocated for their concerns. He was particularly fond of the company of "the fabulous four" and looked forward to their card games together.
At times a stubborn son-of-a-gun, he stuck to his convictions even when debatable, ate his chicken soup piping hot out of a large salad bowl with enough pepper to choke a horse, and overcame embedded generational prejudices enough to become an engaging, affable, and caring man to most.
His service will be held at St. Agnes Church in Reading Saturday morning, December 30, at 10:30 a.m. with visiting hours prior from 9 to 10 a.m. at Douglass, Edgerley & Bessom Funeral Home 25 Sanborn Street in Reading. Burial will be at Pleasant Grove Cemetery in Manchester-By-The-Sea. In lieu of flowers, donations can be made to the Dana-Farber Cancer Institute and the Jimmy Fund, P.O. Box 849168, Boston, MA 02284-9168 or the Veterans Committee at the Wakefield Elks 63 Baystate Rd. Wakefield, MA 01880. For directions and on line guest book visit johnbdouglassfuneralhome.com
Published on December 27, 2017
To plant a tree in memory of Eugene H. Olszewski, please visit Tribute Store.

Plant a tree in memory
of Eugene

A place to share condolences and memories.
The guestbook expires on March 27, 2018.