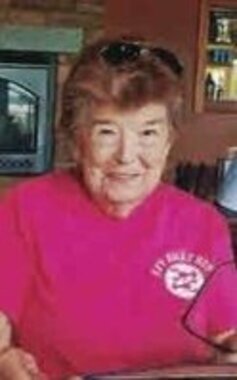 Gloucester - Evaline R. (Catto) Thibodeau, age 86, a lifelong resident Gloucester, passed away Monday morning at Addison Gilbert Hospital in Gloucester. She was the beloved wife of Robert L. Thibodeau. Born in Gloucester, she was the daughter of the late John and Florence (Michael) Catto. She was a graduate of Gloucester High School with the class of 1950.
Evie had been employed as a secretary for the Deering Electric Company for 20 years prior to her retirement in 1990. She previously had been employed at Mass Bonding in Boston and Sylvania in Salem. She also worked in the kitchen at the Beeman School.
Evie was extremely dedicated to her family. She was a talented quilter and knitter. She and Bob enjoyed gardening and traveling in their RV.
In addition to her husband with whom she shared 65 years of marriage, she is survived by her three daughters, Julie Bedard of Gloucester, Joanne McKenney of Saco, Maine, and Cathy White and her husband Michael of Concord, N.H.; two sons, Michael Thibodeau and his wife Patricia of Lanesville and R. Dan Thibodeau of Gloucester; eight grandchildren, Amy, Jason and his wife Rhiannon, Brian, Stephen, Joshua and his wife Bekah, Steven, Alyssa and her husband Nick and Danielle; six great- grandchildren, Cameron, Aaron, Riley, Nolan, Lillian, Madison ad Alexa; one sister, Margaret Allen of Gloucester.
She was also predeceased by her daughter, Heidi; daughter-in-law, Lisa Strong; son-in-law, Laurence Bedard; a brother, Adam Catto; and her sisters, Florence Beaudine and Isabel Harris.

Evie’s memorial service will be held in the Pike-Newhall Funeral Home, 61 Middle Street, Gloucester, on Friday, March 1, 2019, at 12 p.m. In honoring with Evie’s wishes there will be no visiting hours. In lieu of flowers, donations in Evie’s name may be donated to the Rose Baker Senior Center, 6 Manuel F Lewis St., Gloucester, MA 01930. For online condolences and register book, please visit www.pikenewhall.com.
Published on February 27, 2019
To plant a tree in memory of Evaline R. Thibodeau, please visit Tribute Store.

Plant a tree in memory
of Evaline

A place to share condolences and memories.
The guestbook expires on May 27, 2019.