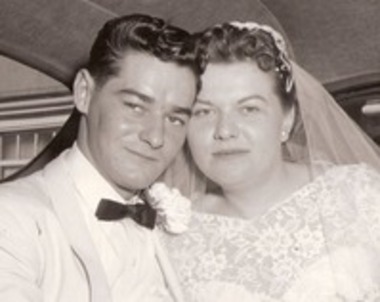 Back to Geraldine's story

Middleton & Gloucester - Geraldine P. Reardon, 85, passed away at home on January 7, 2020, surrounded by her loving husband and children. She was the wife of Myles P. Reardon and together they shared 62 years of marriage.
Born on July 7, 1934, Gerry was the oldest daughter of Arthur F. and Florence (Thompson) Jackman. She attended St. Ann's School and graduated from Gloucester High School in 1953. She worked in Boston for several years at Massachusetts Mutual Insurance Company. In 1957 she married Myles and together they raised five children and shared decades of happiness, housework and home improvements at their home at 199 Washington Street in Gloucester.
Throughout the years, Gerry participated in school activities for her children at St. Mel's Day School and then in the Gloucester Public Schools. She was also an active member of the St. Ann's Parish, where she taught religious education to local children. She was active in the St. Peter's Tigers organization, supported the Gloucester High School JROTC and Band programs and volunteered at Maplewood Avenue School. In addition, she was an avid gardener, who enjoyed working in the yard. The families Chinese Dogwood Tree was photographed by numerous visitors to Gloucester over the years and even garnered awards from the local garden club. Gerry opened her dream gift shop, "The White Gull" on Rocky Neck in 1974. The shop afforded her the opportunity to meet visitors and talk about Gloucester's rich history and bright future. It was also how she taught her older children about running a small business.
With the children grown, she enjoyed retirement with Myles travelling extensively through the southeast United States for many years. Each winter the couple travelled to Florida and slowly meandered their way up the east coast spending time in Georgia, South and North Carolina, Pennsylvania and New England. Each trip included stays at beautiful historic landmarks and some of the greatest golf courses in America. While Myles played the courses, Gerry cheered him on from the shops, museums and local points of interest. In the later years, Gerry and Myles loved travelling to Foxwoods each month for a few days of fun, food and entertainment. They ventured to other casinos including Bangor and Oxford, Maine, Newport and Twin Rivers, Rhode Island and others but always came back to Foxwoods. Her favorite slot machines were "Sex in the City," "Grease" and "Titanic."
In 2018 Myles and Gerry attended their 65th Gloucester High School reunion with daughters, Liz, Cathy and Bonnie. Their good friend and classmate, Jimmy Greely, set up the event and got them all together for one last party. It was wonderful for them to visit with classmates they had known their whole lives and to catch up on years of births, medical appointments, and good memories. At the end of the reunion Mr. Greely recognized Myles and Gerry for "bringing the most children" to the reunion and for being the "longest married original couple of the Class of 1953." He said that they were one of seven couples who married from the graduating class and that they had been married the longest. It was a wonderful recognition of a couple who weathered the test of time, five children and over 60 years together!
Gerry is survived by her loving husband of 62 years, Myles; her five children, daughter, Mary of Key West, Fla.; former son-in-law, Wayne of Wappingers, NY; son, Myles, Jr. and his wife, Marsha of Fayetteville, GA; daughter, Elizabeth of Atlanta, Ga.; daughter, Catherine of Middleton, MA, and daughter, Bonnie of Indianapolis, IN. She is also survived by three loving grandchildren and two great-grandchildren, granddaughter, Kate McIntosh and her husband Matt and their sons Jayden and Damon of Lowell, MA; and granddaughters, Myla and Jacqueline Reardon of Fayetteville, GA. She was predeceased by her sister, Dorothy M. Jackman and the family's favorite pet, Leonardo de Cappuccino.

Visiting hours will be held in the Greely Funeral Home, 212 Washington Street, Gloucester on Sunday, January 12, 2020 from 2 to 4 p.m. and 6 to 8 p.m. A private burial will be held at a later date.
In lieu of flowers, memorial donations can be made to Care Dimensions Hospice, 75 Sylvan Street, Suite B-102, Danvers, MA 01923 or online at www.CareDimensions.org.
For online condolences, please visit www.greelyfuneralhome.com.
Published on January 10, 2020
To send flowers to the family of Geraldine P. Reardon, please visit Tribute Store.

Send flowers
in memory of Geraldine

A place to share condolences and memories.
The guestbook expires on April 08, 2020.

Gracious Lavender Basket was purchased for the family of Geraldine P. Reardon by Paul and Sheila.  Send flowers