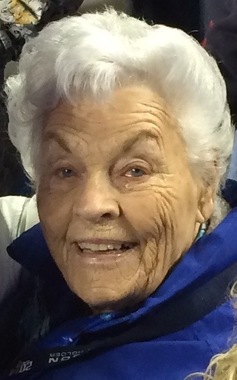 To follow Glenna A. (Roode) (Sullivan)'s Story, enter your email.

Back to Glenna A. (Roode) (Sullivan)'s story

Mrs. Glenna A. (Roode) (Sullivan) O'Hara, 94, of Manchester-by-the-Sea, beloved wife of the late Daniel J. O'Hara, died Thursday, July 20, 2017, at her home surrounded by her loving family.
Born in Middleton, she was the daughter of the late Herbert C. and Lois A. (Hilton) Roode. Raised and educated in Danvers, she was a graduate of the former Holten High School, Class of 1940.
After high school, Glenna first worked at Sylvania in Danvers and later switched to the restaurant industry with employment at the Hawthorne Hotel in Salem. She worked for many years as a server at the Essex Lobster House, the Surf Restaurant, and the Gloucester Tavern. More recently, Glenna was employed with the Registry of Motor Vehicles in Boston as a clerk in the Registrar's office until her retirement.
Glenna embraced life to the fullest and endeared herself to many with her warm personality and radiant smile. She enjoyed boating with her husband, Danny and loved to "Dangle" with her group of friends. She retired to Punta Gorda, Fla. for over 20 years before moving back to the North Shore. Glenna attended weekly Mass at Our Lady of Good Voyage in Gloucester with her daughter. Always dedicated to her family and friends, Nana GG especially delighted in spending time with her cherished great-grandchildren. Glenna will be deeply missed.
Glenna is survived by her daughters, Maureen Perkins and her husband, David of Manchester-by-the-Sea and Colleen A. McCarthy and her companion, Mark Byard of Gloucester. She is also survived by Christian Costa and his wife, Carrol of West Peabody; her grandchildren, David Perkins, Jr. and his wife, Katherine of Beverly, Darrell Perkins of Manchester-by-the-Sea and Kelly Karvelas of Magnolia; her great-grandchildren, Hannah and Grace Perkins and Christopher, Jr. and Kyia Karvelas; her sister-in-law, Barbara Segreve of North Carolina; her dear friends, Sarah Harwood and Megan Frazee; and many nieces and nephews. She was the sister of the late Richard L., Robert E. and R. Dudley Roode.
Relatives and friends are invited to her Funeral Mass which will be held in Our Lady of Good Voyage Church, 142 Prospect St., Gloucester, Saturday, September 9, at 11 a.m. Burial is private. Assisting the family with the arrangements is the Peterson-O'Donnell Funeral Home, 167 Maple St., (Route 62), Danvers. In lieu of flowers, please make a donation in Glenna's memory to the charity of your choice. To share a memory or offer a condolence, visit www.odonnellfuneralservice.com.
Published on August 1, 2017
To plant a tree in memory of Glenna A. (Roode) (Sullivan) O'Hara, please visit Tribute Store.

Plant a tree in memory
of Glenna A. (Roode) (Sullivan)

A place to share condolences and memories.
The guestbook expires on October 29, 2017.