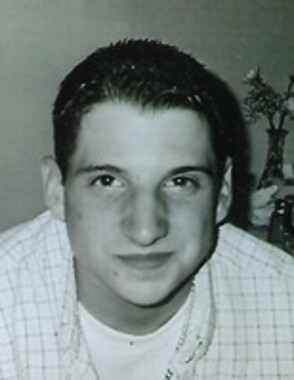 Gloucester - James Michael Odum, 33, of Gloucester, passed away unexpectedly on December 29, 2018 at Addison Gilbert Hospital.
He was born October 7, 1985. He was the son of Angela Contri-Stone of Gloucester MA and Lee Odum of Hillsboro NH. He attended Hillsboro-Derring High school and he received his GED at Job Core in Vermont. It was at Job Core, where his natural talent for manual labor flourished. He was a Jack of all trades, experienced in masonry, painting, carpentry and landscaping. The majority of his career was focused on masonry. As a child, James loved to play floor hockey, pee wee football and hacky sac. He never outgrew his love for animals. It did not matter if the animal was a dog, cat, or a turtle, he found trying to cross the street. James will be remembered as a loving friend with a big heart. For those that knew him, he always had a smirk on his face and would say "Hey, how have you been?" James's true passion in life was being a father to his son, Cody James Odum. James felt blessed to share the love and joy of parenthood with Sarah Tardif. He was an amazing father who loved his son wholeheartedly.
James is survived by his son Cody James Odum, his mother, Angela Contri-Stone, his father, Lee Odum and wife Robin. In addition, James leaves behind his two sisters Jennifer N. Ryan USN, her husband MMCS Justin H. Ryan USN, Leanne Odum, longtime partner of Samuel Parsons. Step siblings Michael, Emily, and Alexander; four nieces and four nephews; maternal grandmother Mary Contri. aunts Mary Cribbs, Brenda Odum, uncle's Thomas Odum Jr, and Jay Odum. Godmother/ Aunt Joanne Contri and Godfather Michael Longo as well as numerous cousins. He leaves behind close friends, Steve MacDougal and Keith Magnett, with a bond so tight they were more like brothers. James also leaves behind his girlfriend, Kylee Barreiro. He was predeceased by his maternal grandfather James S Contri USN, paternal, Marjorie and Joel Wilson; great-grandmothers Angela Strescino and Dorothy Ball and great-grandfather Adolph Peura.
Visiting hours will be held in the Greely Funeral Home, 212 Washington St. Gloucester on Monday, January 7, 2019 from 8:30-10:30 a.m. Family and friends are cordially invited. A graveside service and burial will follow in Calvary Cemetery, Eastern Ave, Gloucester. Online condolences may be given at: www.greelyfuneralhome.com.
Published on January 5, 2019
To plant a tree in memory of James M. Odum, please visit Tribute Store.

Plant a tree in memory
of James

A place to share condolences and memories.
The guestbook expires on April 04, 2019.

Restore the guestbook to view the 14 more posts by family and friends, and share a memory or message of condolence of your own.