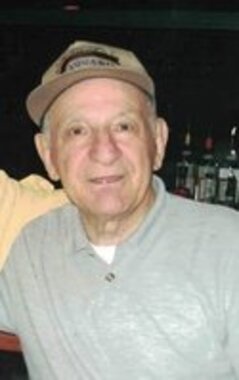 Gloucester - John “Johnski” Favazza, 90, of Gloucester, passed away on Saturday morning in Seacoast Nursing and Rehabilitation Center after a lengthy illness. He was the husband to Mary (Catania) Favazza with whom he shared over 60 years of marriage.
Johnski was born March 10, 1928, in Gloucester, he is the son of the late Carlo and Vincenza (Orlando) Favazza. He was a lifelong resident of Gloucester and attended Gloucester High School. He grew up in the fort and was predeceased by his 13 siblings.
Johnski served in the United States Navy.
He worked as a Custodian for the City of Gloucester for several years until his retirement. He previously worked on the Gloucester Waterfront as a Fish Cutter for many years.
Johnski treasured the time he spent with his family, spending time with his friends at the Amvets, American Legion, The Olde Timers, and later at the house of Mitch. He also enjoyed painting waterfront pictures, an avid playing golfer and bowler.
In addition to his loving wife Mary, John is survived by his two children Vincie Caisse of Gloucester and Carlo Favazza of Rockport. His grandchildren Kayla Caisse, Haleigh Caisse, Emily Caisse and Robert Caisse. He is also survived by two great-grandchildren, Alexis and Caleigh Dundon; as well as many nieces and nephews.

Johnski’s Funeral Service will be in the Pike-Newhall Funeral Home, 61 Middle St., Gloucester, on Friday, December 28, 2018, at 10 a.m. A time of visitation will be prior to the service beginning at 9 a.m. Interment will follow on Calvary Cemetery, Gloucester. For online condolences and register book, please visit www.pikenewhall.com.
Published on December 26, 2018
To plant a tree in memory of John P. "Johnski" Favazza, please visit Tribute Store.

A place to share condolences and memories.
The guestbook expires on March 25, 2019.