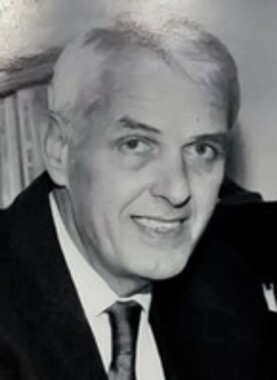 Rockport - John Morrison Twombly, Jr., 84, passed away peacefully on November 13th from age related illnesses at Seacoast Nursing Home surrounded by his family. John was born on July 12, 1935 in Ware, Mass. to Myrtle (MacDonald) and John M. Twombly, Sr. and grew up in Allston. For 40 years John and his sisters Barbara and Virginia summered at Long Beach in Rockport, finally making Rockport his permanent home in 1970.
John was a graduate of Brighton High School and a graduate in 1957 of Boston College where he also completed his Master's degree in Education and pursued his doctoral studies. Throughout his life John touched the lives of thousands of students from being a Rockport coach, a science teacher in Norwood and at Malden Catholic High School, the Principal of Matignon High School in Cambridge, Headmaster of the Solstice School in Rowley and a member of the Special Education Department of Manchester Essex High School and as a professor at Endicott College. He was the Chairman of the Rockport Housing Authority and a member of the Rockport Recreation Committee. His legacy as a champion for education and human service is shared by his wife, Patricia, and his children. John was an exceptional athlete, playing football and baseball at Boston College, and also playing for the 1952 Boston Braves. Upon completing his college undergraduate degree, he enlisted in the Air Force and was always proud of his service. John was a beloved Rockport community member who served on the Rockport Recreation Committee and the Rockport Housing Authority. He leaves behind his wife of 58 years, Patricia; his daughter, Paula and her husband Keith Gray and their daughters, Bethany, Anna and Mary; his son John III (Ted) and his wife, Stacey and their daughters Molly, Lucy and Francesca; his son, Peter and his wife, Gillian and their daughter Abigail; his son Donald and wife, Laurie and their children Emma, Calvin, Phoebe and Tessa; his son, Gregory and his wife Emily and their sons Morrison, Patrick and Phillip. John's favorite quote was from Mother Teresa: "Kind words can be short and easy to speak, but their echoes are truly endless." He will be greatly missed.
A casual drop-in Celebration gathering will be held on Friday, November 29, between 3:00 and 5:30pm at the Castle Manor Inn 141 Essex Ave., Gloucester, MA. In lieu of flowers, donations will be gratefully accepted by The Rockport Friends of Athletics, P.O. Box 304, Rockport, MA 01966. Arrangements are by the Greely Funeral Home, 212 Washington St. Gloucester. Online condolences may be given at: www.greelyfuneralhome.com.
Published on November 21, 2019
To plant a tree in memory of John M. Twombly Jr., please visit Tribute Store.