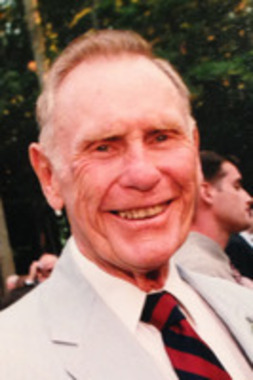 Hamilton - John W. Tyack, 92, of Plum Street, died Friday, January 3, 2020, in the Masconomet Healthcare Center, Topsfield, following his long illness. He was formerly the husband of the late Carol (Weston) Tyack and longtime companion of Marilyn Orlando of Gloucester.
Born in Jamaica Plain on August 4, 1927, John was the son of the late Samuel J. and Mary (Wheeler) Tyack. Raised in Hamilton, he was a 1945 graduate of Hamilton Public Schools.
During two years of WWII John served as a Seaman First Class with the Navy in the Asiatic Pacific Theater. Following his Honorable Discharge he returned to Hamilton and soon went to work with New England Telephone. For 30 years he served as an installer-repairman from which he retired in 1984.
He enjoyed his free time traveling and bicycling.
He was a member of the A.P. Gardner American Legion Post #194 in Hamilton (where he served as chaplain for many years), the Ipswich VFW post #1093 and had been a member of the Hamilton Lions Club.
John is survived by four sons, William J. Tyack and his wife Roberta of South Hamilton, Robert S. Tyack and his wife Melanie of Essex, Richard W. Tyack and his wife Ramona of Illinois, James M. Tyack and his wife Mary of Quincy; 15 grandchildren; seven great-grandchildren; several nephews; nieces and many friends. He was the brother of the late David B. Tyack, formerly of California.

Family and friends are cordially invited to visiting hours 4 to 7 p.m., Thursday, January 16, in the Whittier-Porter Funeral Home, 6 High Street, Ipswich. Interment with Naval Honors will be private. In lieu of flowers memorial contributions in his name may be made to the A.P. Gardner American Legion Post #194, 37 School St., Hamilton, MA 01982. For directions and or to leave a condolence, please visit www.whittier-porter.com.
Published on January 15, 2020
To send flowers to the family of John W. Tyack, please visit Tribute Store.

A place to share condolences and memories.
The guestbook expires on July 10, 2020.

Bob Gilbert Past Commander post 194
A real gentleman... one of the nicest people I have ever known..when I was the Commander I always knew I could count on him to help steer me in the right direction.. To Billy.. my highest respect and deepest condolences..
Michael. Dailey
I worked with. John in N.E.T.T in 1968 in Ipswich I remember him as a very kind and gentle man. He was my mentor as I was just hired and rode with him in his truck. Rest in peace. John and thanks
Post 194 Commander
John was always a dedicated member of our Post and a pleasure to have as part of our organization.
Clifford Thomson
I was employed by New England Telephone in the same time frame as John. He was a real gentleman and always had a smile on his face. He was well liked by all.
Trudy & Dave
Bill and Roberta - so sorry to read of the passing of Bill's dad. You and your family will be in our thoughts and prayers.
View all