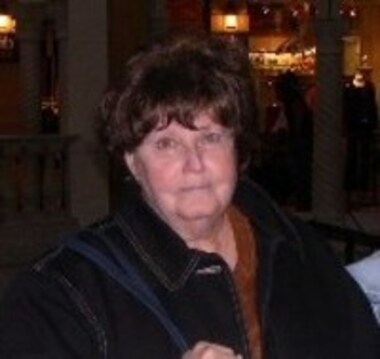 Back to Judy's story

Gloucester - Judith 'Judy' L (Katon) Parisi died Friday evening at the Kaplan Family Hospice House in Danvers following an illness. Born in Gloucester she was the daughter of the late Henry and Ruth (Parnell) Katon of Manchester. Raised in Manchester she was a graduate of Story High School. Prior to her retirement Judy worked for many years as a teller at the former Cape Ann Bank & Trust and the First National Bank of Ipswich, later on she worked for the former Osco Drug all in Gloucester. Judy is survived by her son Joseph 'Jay' Parisi and his wife Margaret Alfonso of Middleton, three sisters Karol Parsons and Lois Mazzeo of Gloucester and Nancy Hovey of Myrtle Beach, South Carolina, a brother-in-law Jack Parisi and his wife Debra of Hampton Georgia , a sister-in-law Grace McArdle and her husband Tom of Williamsburg Virginia as well as many nieces and nephews. She was predeceased by her husband Salvatore "Sam" Parisi and a son Jeffrey Parisi. There will be no services per her request. The family suggests any contributions made in her name to Care Dimensions, 75 Sylvan St. B-102, Danvers, MA 01923, or online at www.caredimensions.org.
Published on January 13, 2020
To send flowers to the family of Judy Parisi, please visit Tribute Store.

Send flowers
in memory of Judy

Velma Ambrose
Dear Jay and Margaret
I’m at a loss as to what I want to say. We were friends all our lives. We lived on the same street before we even went to school, and friends ever since. I’m not there, but I will miss her dearly.
Love to both of you, and take care of each other.
Pete Phillips
Sorry to hear of Judy's passing. I got to know her and Sam during Sunday afternoon coffee at her mother-in-law Josephine's home, where I rented an apartment. Always liked Judy, and all of the Parisi family, for that matter. Sincere sympathy and peace to all of you.
Donna Renkert
I am very sorry to learn of the passing of Judy. She was very kind and gracious to me. My deepest sympathy to her family.
Joan Merchant Lane
I send my deepest sympathy to all of Judy's loving family. She was a special lady who's passing will be felt by all whose life she has ever touched !
Cathy Sinagra Russ
Dear Jay,
I'm so sorry for your loss. Your mom was so nice. I know she cherished everything you did for her. I wish you the best.
Cathy
View all