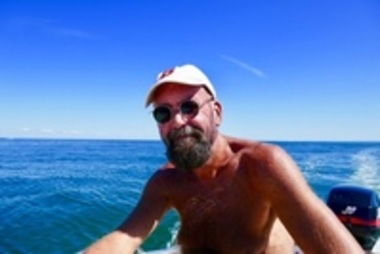 Back to Lawrence's story

Rockport - Lawrence E (Larry) Bettley Jr., 58, of Rockport, Massachusetts, set sail on Tuesday, February 4, 2020. Larry was born in Worcester, Massachusetts, to Lawrence E. Bettley Sr. and Marianne (Conroy) Bettley. Larry grew up in Tatnuck Square in Worcester where he atended West Tatnuck Elementary, Chandler Junior High, Doherty High, Worcester State University and CCD and CYC at Christ the King Church. At an early age, Larry developed a talent for woodworking, music, art, and writing. His accomplishments were many, from constructing log cabins in the woods with friends to working on the mast for the America's Cup in San Diego. He was constantly creating, making furniture, sculptures, and writing hysterical song lyrics that kept everyone laughing. Larry loved the water and boats of any kind. After meeting the love of his life, Lynne, he fulfilled a long held dream and moved to Gloucester to live by the sea. There he learned to love building boats and made lifelong friends at Lindsay Custom Yachts. Seeking warmer climes, Larry and Lynne moved to Florida and lived in several locations on the Gulf of Mexico, where Larry continued to work building boats, as a general contractor, rock waterfall mason and at Anderson Lumber. They moved back to Cape Ann in April, 2019. Larry worked at Timberline in Gloucester, where he made many great friends. He was known there as "Bad Larry," and continued to create artwork and lyrics to the end.
Larry leaves behind his beloved wife of 33 years, Lynne (Potvin) Bettley; his step-son Matthew Perkins and his wife Jaimie of Newton, Mass.; his mother Marianne (Conroy) Bettley of Gulfport, Fla.; his brother John Bettley of Seattle, Wash.; and his sister Kathryn (Bettley) Bastien of Paxton, Mass. Larry was predeceased by his father, Lawrence E. Bettley Sr. In addition to the Bettleys and the Potvins, Larry's family is extensive. He will be missed by so many in-laws and nieces, nephews, and cousins: the Gonyeas, Re-mingtons, Morans, Glendyes, MacNeils, Woloszs, Mahoneys, Brosnihans, Bastiens, Conroys, Lazaros, Phaneufs, Sheahans, Fords and Delaneys.
A Mass in celebration of Larry's life will be held at 10 a.m. on Saturday, February 15, at Christ the King Church, 1052 Pleasant Street, Worcester, MA. A celebration of Larry's life for his Cape Ann family and friends will be held 12 to 3 p.m. on Sunday, February 23, at The Elks Lodge, 97 Atlantic Road, Gloucester, MA. A celebration with Larry's family and friends in Florida will be held at a future date. Arrangements by Greely Funeral Home, 212 Washington Street, Gloucester, MA 01930. For online guestbook, please visit www.greelyfuneralhome.com.
Published on February 12, 2020
To send flowers to the family of Lawrence E. Bettley Jr., please visit Tribute Store.

Send flowers
in memory of Lawrence

A place to share condolences and memories.
The guestbook expires on May 11, 2020.

Kristina Johnson Johnson
He was my second cousin once removed, I believe. Condolences to all. Kristina, daughter of Eleanor Katherine Bettley Johnson, granddaughter of Emil Lawrence Bettley Sr.
Ani Crane
RIP Larry
Susan DiCaro
Sorry for your loss. You’re in my thoughts and prayers .
View all