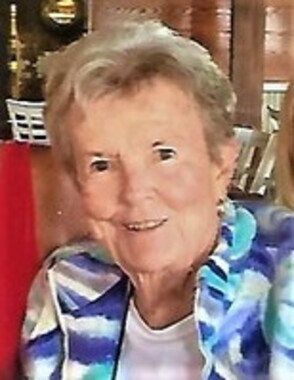 Magnolia - M. Patricia "Pat" (Dagle) Philpott, 82, of 215 Hesperus Ave., Magnolia, passed away peacefully on Wednesday, November 27, 2019, at her home, with her loving family by her side. She was the wife of the late Richard W. Philpott. She was born in Gloucester, on July 16, 1937 to the late Robert C. and Mary A. (Hyland) Dagle.
"Pat" was a graduate of Gloucester High School, Class of 1955 and then went on to graduate from Lynn Hospital School of Nursing in 1958. She was employed by Addison Gilbert Hospital as a registered nurse then Grey Cliff (formerly Cape Ann) Nursing Home for 25 years, many of those as Director of Nurses. In 1992, she moved on to care for people in their homes with Visiting Nurse Association (VNA) in Gloucester. While at the VNA, she was a Hospice Nurse and was quoted in a 1985 Gloucester Times Article on Loved Ones Dying at Home - Pat said "We try to provide as much service as we can, not only to take care of patient's needs, but to allow the family to have time themselves. It's rewarding, too. You get to know the patient and the family, and you are really helping them through a bad time". That is how she spent her forty- seven-year nursing career, taking care of others. She retired from the VNA in 2005.
She was devoted to her family and her greatest joy was watching her children and grandchildren play sports. Always doing her share of work and in the early years was actively involved in the GHS Football Boosters. As her grandchildren became active in sports, she enjoyed attending and being their greatest fan. She was a lifelong resident of Magnolia and loved spending time on Magnolia Beach reading and spending time with family. She also enjoyed her special times with friends Geri Selig, Nancy Davis and Edith Blodgett whether it be trips to Las Vegas and Foxwoods or dining out.
She is survived by her four children, Richard F. Philpott and his wife, Alma of Manchester, Patricia A. Philpott and her fiance, Sean P. Doyle of Ipswich, Timothy J. Philpott and his wife, Michelle of Magnolia and Susan L. Philpott and her fiance, Dave L. Larsen of Gloucester; her 10 grandchildren, Michael R. Orlando of Gloucester, Vincent A. Orlando of Beverly, Katelyn E. Orlando of Peabody, Patrick D. Orlando of Medford, Emily R. Philpott and fiance Eddie Newton of Gloucester, Douglas M. Porter Jr. of Ipswich, Alex W. Porter of South Boston, Adam R. Philpott, of Gloucester, John D. Philpott, of Gloucester and Jessie E. Philpott of Manchester; a great- granddaughter, Summer K. Orlando and her mother Jaqueline Smith; three special cousins, Timothy Hyland and wife Penny of Mount Pleasant, SC, Maureen (Hyland) Begina of Farmingdale, NY and Kathleen Hyland of Danvers; nephew, Thomas Russell and wife Denise, and nieces, Lynne Corrigan and husband Peter and Maureen Spinney and husband, Dan.
In addition to her husband and parents, she was predeceased by her daughter, Kathleen E. Orlando; her brother-in-law, Edward. F Philpott and his wife Louise and her sister-in-law, Lois Russell and her husband Frank.
Her family would like to extend a special thanks to Seacoast Nursing Home and the hospice team of Care Dimensions for their loving care.
In keeping with her wishes, there will be no visiting hours.
Her funeral Mass will be celebrated on Wednesday, December 4, 2019 at 12 noon in Sacred Heart Church, Manchester-by-the-Sea. Relatives and friends are cordially invited to attend. The burial will follow in Rosedale Cemetery, Manchester-by-the-Sea.
In lieu of flowers, donations may be made in her name to VNA of North Shore, 199 Rosewood Drive, Suite 180, Danvers, MA 01923 or to the Magnolia Pier Fund - Magnolia Beach Corp, c/o Noreen Gillis, 28 Lake Road, Magnolia, MA 01930.
Arrangements by the Greely Funeral Home, 212 Washington Street, Gloucester, MA. For online condolences, please visit www.greelyfuneralhome.com.
Published on November 30, 2019
To plant a tree in memory of M. Patricia Philpott, please visit Tribute Store.

Plant a tree in memory
of M.

With love, Jo, the Wentworth girls, and family xoxo

Medium Dish Garden was purchased for the family of M. Patricia Philpott by With love, Jo, the Wentworth girls, and family xoxo.  Send flowers

Marilyn Horne
So Sorry to hear of your Mom's passing. My thought and prayers are with you and Michelle and your Family.
JB Amero
A long time friend of Susan‘s, I’m so sorry for your loss. After seeing the photo of your mother I can see where you got your beauty.
View all