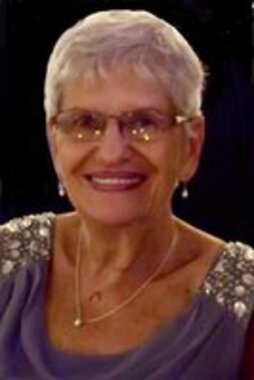 Back to Marion's story

Gloucester - Marion C. (Hautala) Swanson, 83 years, passed away peacefully surrounded by her loving family on Saturday, November 9, 2019, at Seacoast Nursing Home in Gloucester. She was the beloved wife of the late Ronald H. Swanson whom she was married to for 43 years. Born in Gloucester, on August 27, 1936, Marion was the daughter of the late Urho "Jim" and Helen (Moses) Hautala. Marion was a graduate of St. Ann's High School of Gloucester. Marion was a resident of Gloucester and resided in Del Ray Beach, Fla., for many years.
Marion and her husband enjoyed square dancing. They were members of the Skipper's Square-Dancing Club. Marion was also a member of The Coffee Cup Woman's Bowling League of Gloucester, and a proud member of the Pocahontas Club Uticia Council # 46. She was a talented artist and received many awards in local fairs. She was an avid gardener and swimmer. Marion loved her family and enjoyed hosting weekly family gatherings at her homestead of Lanesville. She was devoted to the catholic faith and attended Sacred Heart Church of Lanesville and Holy Family Parish of Gloucester.
Marion was employed for 20-years as a Homemaker for Action Inc. of Gloucester. She was very dedicated to the community of Gloucester and all the people she cared for.
Marion is survived by her three daughters, Donna Swanson Porter of Gloucester, Beverly Swanson Roberts and her companion David Santos of Gloucester, Nancy Swanson Stephan and her husband Martin Stephan of Fla.; two sons, Brian Swanson and his companion Pam Eastman-Gauvin of Conn., and Bruce Swanson and his wife Patricia of Beverly; nine grandchildren, Roger Porter III and his wife Patti of Gloucester, Scott Porter and his wife Corey of N.H., Philip Wong and his companion Kristen Hunter of Newburyport, Jessica Trotsky and her husband Alex of Gloucester, Alannah Gannon Shields of Gloucester, Denica Keeney and her husband Joshua of N.H., Adam Phipps-Swanson of N.Y., Ian Swanson of Calif., and Alissa Small of Maine; eight great-grandchildren; one sister, Lois Cilluffo of Gloucester; two brothers, John Hautala and his wife Ruth of Gloucester and Arne Hautala of Gloucester, Marion was predeceased by a sister, Elizabeth "Betty" Berchtold; a sister-in-law, Marianne Hautala; and two brothers-in-laws, Robert Berchtold and Paul Cilluffo.

Plant a tree in memory
of Marion

A place to share condolences and memories.
The guestbook expires on February 10, 2020.

Mary Jo Kelly
What a wonderful tribute to your beloved mother. Though you will miss her dearly, I hope you find comfort in the many fond memories you’ve shared. Love and prayers
Sue, Billie and Pat Terry
We are so sad at Marion's passing.
We will surely miss her, Donna, Bev and Dave and all of your daily faithful visits to see her at Seacoast. She was so lucky to have such a wonderful family to be there for her every day. ❤
When we meet and become close to the families of other patients, it makes our journey with our mom that much easier.
Marion was a wonderful person, right to the end. You are all truly blessed.
Sending condolences, love and prayers to all of you.
❤
Debbie Irving
My thoughts & Prayers
are with you all during this
difficult time 🙏
Sincerely ,
Deb Irving
Jill porper
Habibi I will miss you..💕my condolences to your family
Kendra Andrews

I am so sorry to hear about Marion.She was a wonderful lady that was very good to me.My heart goes out to Donna,Roge,Patty,and the rest of the family.

Zoee crowley
You were a fun loving special person always had nice things to say about everyone. Rest I peace.
Nancy Wonson

My thoughts and prayers are with you today. Peter and I share many happy times with both Marion and Ron
And with the whole family She was always smiling and so enjoyed being with her family. She was a kind thoughtful person.
I remember the long drive to New York to visit Brian and Adam with Denica and all the laughs we had together
Wish I was able to come to the service but you with be in my thoughts and prayers
I now live in Venice FL
Fondly Nancy Wonson