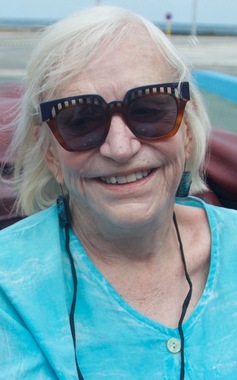 Back to Martha (Rozinsky)'s story

Martha (Rozinsky) Soshnick, of Rockport, Mass., and Sanibel, Fla., beloved wife of the late Julian Soshnick, with whom she married in 1957, and enjoyed 43 years of marriage, died Friday, August 11, 2017, at the age of 83.
Born in New York City, she was the daughter of the late Jacob and Anne Rozinsky.
Martha began her career with Catalyst, where she was a social worker for the welfare system in Roxbury, Mass. At a time when women tended to stay home, Martha served 16 years as a social worker. She continued her education and passed the bar exam and formed a law firm with her partners in Rockport, Mass. Prior to retiring in 2000, she and her friends formed the Acacia Gallery in Gloucester.
Community spirited, Martha was very generous with her time and supported many charities with Planned Parenthood and the Dana Farber Cancer Institute at the top of her list.
During her retirement, Martha passed her time painting, however, her greatest satisfactions were her close knit family and creating art work. She was humorous, witty, intellectual, and unusual, and will be deeply missed by her loving family and friends.
Surviving Martha are her lifelong friend and consort, Martyn Culverhouse; daughter, Jo Anne Soshnick; granddaughter, Ella Soshnick; son, Jeffrey and daughter-in-law, Bobbie Suzanne Soshnick; and granddaughter, Sarah Soshnick.
Relatives and friends are invited to a Celebration of Martha’s life which will be held at her home, 111 Granite St., Rockport, on Saturday, August 19, at 10 a.m. Assisting the family with the arrangements is the Peterson O’Donnell Funeral Home, 167 Maple St. (Route 62), Danvers. Expressions of sympathy may be made in Martha’s memory to Planned Parenthood Federation of America, P.O. Box 97166, Washington, DC 20090; or to Dana Farber Cancer Institute, P.O. Box 849168, Boston, MA 02284. To share a memory or offer a condolence, please visit www.odonnellfuneralservice.com.
Published on August 16, 2017
To plant a tree in memory of Martha (Rozinsky) Soshnick, please visit Tribute Store.

Plant a tree in memory
of Martha (Rozinsky)

A place to share condolences and memories.
The guestbook expires on November 13, 2017.