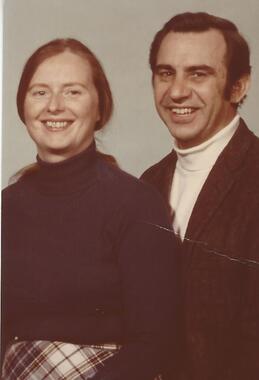 Back to Mary Ellen (Mills)'s story

Mrs. Mary Ellen (Mills) Belmore, 85, of Danvers, died peacefully, July 15, 2017, after a short stay at Ledgewood Rehabilitation and Skilled Nursing Center in Beverly. She was the devoted wife of the late Robert M. Belmore with whom she shared 24 years of marriage.
Born in Boston, she was the daughter of the late William P. and Ruth E. (Wonson) Mills of Rockport.
Mary Ellen was a graduate of Gloucester High School, Class of 1949. She continued her education and earned a Bachelor of Fine Arts degree from the Rhode Island School of Design, majoring in advertising design and graduating in 1953. She also attended the Hickox Secretarial School in Boston, earning a proficiency certificate in typing and shorthand skills.
Mary Ellen worked in Boston as an artist at Rust Craft Greeting Cards, at Cabot Corporation as a secretary to the advertising manager and briefly as a temp at Parker Brothers offices in Beverly. Later in life, after raising her five children, she went back to work at the Hogan Regional Center in Hathorne as a clerk typist before taking early retirement to help care for her parents.
Mary Ellen enjoyed nature, bird watching, reading, and yard sales. For many years she was a familiar face on weekends looking for “hidden treasures” in nearby towns.
Mary Ellen is survived by her children and their respective families; her daughters, Amy E. Justice and her husband, Peter of Gloucester, Suzanne Belmore of Bass Harbor, Maine and her former husband, Jonathan Greeke of Groveland, Nancy A. Silva and her husband, Jose of Rockport, Stephanie Belmore of Danvers, and her son, Robert Belmore Jr. of Danvers. She also leaves behind her six beloved grandchildren, Matthew, Susanna, Laura, Michael, Isabel, and Juliana. In addition, she is survived by her sister, Natalie Brock of Rockport.
Relatives and friends are invited to attend her funeral service which will be held graveside in Beech Grove Cemetery, Pleasant Street, Rockport on Tuesday, July 18, at 11 a.m. Assisting the family with the arrangements is the Peterson-O’Donnell Funeral Home, 167 Maple St. (Route 62), Danvers. The family respectfully requests, in lieu of flowers, expressions of sympathy may be made in Mary Ellen’s memory to a charity of one’s choice. To share a memory or offer a condolence, please visit www.odonnellfuneralservice.com.
Published on July 17, 2017
To plant a tree in memory of Mary Ellen (Mills) Belmore, please visit Tribute Store.

Plant a tree in memory
of Mary Ellen (Mills)

A place to share condolences and memories.
The guestbook expires on October 14, 2017.