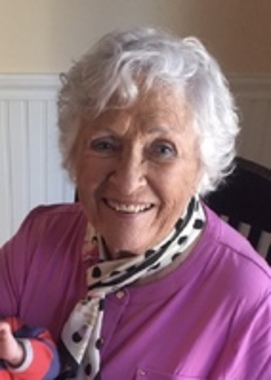 N. Attleboro - Mary (Sullivan, Ierardi) Donohoe, a WWII veteran, died at her home in North Attleboro at the age of 97 surrounded by her loving family. Mary was a lifelong native of Lowell, Mass., and summer resident of Rockport, Mass. She was the wife of the late Dr. Philip A. Ierardi (1951), and the late Frederick P. Donohoe (2010). She was born in Lowell, Mass., to the late Edward and Mary (Gill) Sullivan. Mary was predeceased by her brothers Dr. Edward D. Sullivan, John J. Sullivan and Peter F. Sullivan. She is survived by her sisters, Ann Fox of North Andover, Mass.; sister Janet Sullivan of the Franciscan Sisters of Allegany, N.Y., Sheila Corey of Palm Beach, Fla.; and sister-in-law, Virginia "Ginger" Sullivan of Lowell, Mass.

Mary was proud to be a lifelong resident of Lowell, Mass., where she graduated from Sacred Heart Grammar School, Lowell High School, and St. John's School of Nursing, graduating with an R.N. degree. After graduating, she enlisted in the U.S. Navy Nurses Corp as an Ensign and was stationed at the U.S. Naval Hospital in St. Albans, N.Y., where she cared for wounded servicemen returning from the Atlantic and Pacific Theater of Operations. Her passion was taking care of the veterans especially after Pearl Harbor, and the wounded servicemen from Bataan and Iwo Jima. When she was discharged from the Navy, she continued taking care of veterans at the V.A. Hospital in Bedford, Mass., where she spent many years as head nurse of the operating room and outpatient.
She will be greatly missed.

Family and friends are invited to attend her graveside funeral service on Monday, Jan. 27, 2020, at 11 a.m. at
St. Patrick's Cemetery, (Graveside Yard 5-B), 1251 Gorham St., Lowell. As an expression of sympathy, in lieu of flowers, donations in Mary's memory may be made to Community Rowing Inc. Military and Para Rowing, 20 Nonantum Road, Brighton, MA 02135, or Old Colony Hospice, 321 Manley Street, West Bridgewater, MA 02379.

Send flowers
in memory of Mary

A place to share condolences and memories.
The guestbook expires on April 23, 2020.

Catherine Barker-Ross (Clark)
Dearest Mary-so many Long Beach memories. I know we will meet again with my Mom, hanging out clothes, having great conversation out the back doors, and over the eel grass.
You will be missed and always loved, Sending my thoughts to your family
Agnes Sosnowska

Love you all, Love Meggy McKenna

Blue Caribbean was purchased for the family of Mary W. Ierardi Donohoe by Love you all, Love Meggy McKenna.  Send flowers

Michelle B
So sorry to hear of the loss of Mary..she will be sadly missed...always a great conversationalist! Loved her stories & loved that she always laughed & made you laugh..RIP. Xoxoxo. Love, Michelle,Rob,J&M Bodoni
Janet Mulligan
God bless You, Mrs. Donohoe. You were such a bright light for everyone you encountered. Always warm and welcoming with your beautiful smile. I will miss your wonderful laugh and your quick Irish wit!
Ruth Ann
Mary was one of my heroes. She seemed to do everything with such grace and determination, and I will so miss her infectious laugh and positive attitude. Long Beach will not be the same without her.
View all