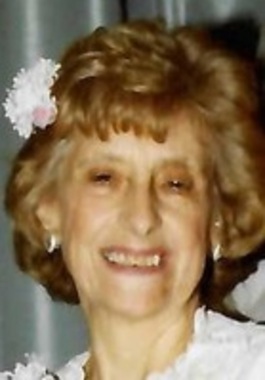 Back to Nina's story

Gloucester - Nina R. (Orlando) Favazza, 100, formerly of Beacon Street, died peacefully November 29, 2019, at the Gloucester Healthcare Center surrounded by her children. She was the wife of the late Michael A. Favazza, who died in November of 2011. They had shared nearly 72 years of marriage.
Born in Gloucester on October 22, 1919, she was the daughter of the late Vincent and Sarah (Palazzola) Orlando. A lifelong resident of Gloucester, she attended Gloucester public schools. A member of Madonna del Rosario Society.
Nina was one of 12 children. She loved knitting and was a wonderful cook. A loving and devoted wife, mother, grandmother, sister and friend, she will be greatly missed.
She is survived by three sons, Salvatore C. and his wife, Mary Lou (Brigham) Favazz, Jim J. Favazza and Michael A. Jr. and his wife, Karen (Goodrich) Favazza; a daughter Jodi and her husband, Dan Warner, Vincent and his wife, Cindy Asaro; grandchildren, Kenneth, Bryan, Jason, Rhonda, David and Justin Favazza, Kristin Hiltunen, Julie Gardner, Marissa, Stephen Warner, Laurey Tedesco, Lisa Hampton and John Asaro; seven great-grandchildren, Courtney, Nick and Jacob Favazza, Cole and Ryan Gardner, Charlotte Favazza and Kail Hiltunen; great-great-grandson Gabriel; a sister, Nancy Kinghorn; three sisters-in-law, Josephine Orlando, Betty Ciulla, JJ, wife of Peter Pramas; three brothers-in-law, Joseph and his wife Grace (Aiello) Favazza, Phil Imperato and Richard Davis; and many, many nieces and nephews. She was also predeceased by her daughter-in-law, Mona Jean (Brown) Favazza and Phyllis (Nicastro) Asaro; five brothers, John, Gaspar, Carlo, Joseph and Anthony Orlando; five sisters, Madeline, Petrina, Florence, Antoinette and Phyllis; four sisters-in-law, Grace Davis and Pat Imperato, Nina Benson and her husband Louis, Grace Parisi and husband Ben; and a brother-in-law Gordon Kinghorn.

Her Funeral Mass will be celebrated in the Holy Family Parish, St. Ann's Church on Wednesday, December 4, 2019, at 11 a.m Relatives and friends are invited to attend. Interment will be held in the Calvary Cemetery. A visiting hour will be held prior to Mass from 9:30 to 10:30 a.m. at the Campbell Funeral Home, 61 Middle Street, Gloucester. Information, directions, condolences at www.campbellfuneral.com.
Published on December 2, 2019
To plant a tree in memory of Nina Rose Favazza, please visit Tribute Store.

Plant a tree in memory
of Nina

A place to share condolences and memories.
The guestbook expires on February 29, 2020.

Dana Brown
I'm so sorry to hear of the loss of your mom. I remember her well. My thoughts and prayers are with you all at this sad time ...♥️⚘
Richard & Flo Morrell
So sorry for your loss. Just know she is with others who have gone before her and she is watching over you!

A Full Life was purchased for the family of Nina Rose Favazza.  Send flowers