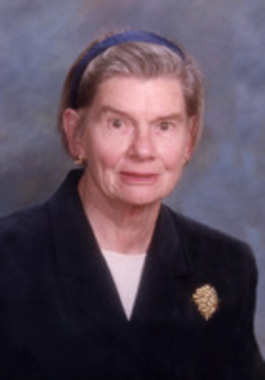 Back to Patricia's story

Needham, MA - Patricia Baker Koechlin died peacefully with family by her side at the North Hill Senior Community in Needham, Massachusetts, on January 28, 2020. She was 95 years old. Mrs. Koechlin was born on July 18, 1924, in Chelsea, Mass. She was a daughter of Herbert and Mary (Cotter) Baker. She was a 1941 graduate of Lowell High School, where she was class salutatorian. She graduated from Radcliffe College with a degree in mathematics in 1945. She rowed on the first Radcliffe crew, which gained national recognition after the Harvard crew-apparently amused by the novelty of women rowing on the Charles River in 1945-challenged Radcliffe to a race. A photograph of Radcliffe's crew appeared in the New York Times with this caption: "Radcliffe Girls Ready to Race Harvard Men." The Radcliffe "girls" won the race. After her graduation from Radcliffe, she worked at the Department of Physical Chemistry at Harvard Medical School, where she met her future husband, Bernard Alphons Koechlin, Ph.D., who had come to Harvard from Switzerland as a post-doctoral fellow. They were married in 1948. In 1955, they moved to Montclair, New Jersey, where they raised their six children.
Her fourth child was born with Down Syndrome, after which Mrs. Koechlin became an advocate for the developmentally disabled. She chaired the Government Affairs Committee of the New Jersey Association for Retarded Citizens (NJARC) and the Essex County Unit of the NJARC. As New Jersey reduced the population in state institutions for the intellectually disabled, she chaired a state committee to advise the New Jersey Public Advocate on community placement of the intellectually disabled. She was appointed by the Governor of New Jersey to the Board of Managers of Woodbridge State School and to the Developmental Disabilities Council of the State of New Jersey. She was a prominent activist and participant in local affairs in Montclair. She was an elected member of the Montclair Town Council from 1980-84, a member of Montclair's Planning Board from 1984-1992, a founding member of the Montclair Fair Housing Committee, and a Trustee of Montclair Community Hospital.
She was also a tireless and fearless activist for peace, women's rights, civil rights and social justice. In 1967, she and her husband were "testers" and witnesses in a precedent setting legal case (Gray v. Serutto Builders) where, for the first time, a victim of housing discrimination was awarded monetary compensation. Through her work with the League of Women Voters, she promoted democratic participation and greater fairness in New Jersey's tax code. Mrs. Koechlin earned a master's degree in Mathematics from Montclair State College in 1977. She was subsequently employed by Roche Laboratories as a Senior Statistician. In 1992, she and her husband moved to Rockport, Mass. She served on the board of New England Village in Pembroke, Mass., and on the Town of Rockport's Personnel Board, Finance Committee, and Rights of Way Committee.
She was an avid bike rider into her 80s. She loved to walk and hike, and she enjoyed the beauty of Cape Ann's forests and rocky shoreline. After moving to Needham, Mass., in 2017, she frequently commented that she missed her view of the Atlantic Ocean. She was an inspiration to her children, her grandchildren and to many others. After 61 years of marriage, her husband died in 2010. She was also predeceased by her sisters, Hariot Deutscher and Mary Nelson.
She is survived by a daughter, Emily, of Takoma Park, Md., and five sons: Patrick (Julia) of Rye, N.Y., Nicolas (Catherine) of South Salem, N.Y.; John, of Pembroke, Mass.; Timothy (Katherine Joyce) of Montclair, N.J., and Carl Nagy-Koechlin (Beth Nagy) of Dorchester, Mass.; by six grandchildren: Alexander Walzer Koechlin, Leah Walzer Koechlin, Mikael Sergey Koechlin, Rémy Ivan Koechlin, Joshua Lee Koechlin Nagy, and Julian Alphons Koechlin Nagy; by three step grandchildren: Elisa Kelly, Nora Kirk and Benjamin Feldman; and by 10 step-great-grandchildren.

There will be a visitation at the Greely Funeral Home, 212 Washington St., Gloucester, MA, on Friday, February 7, from 5 to 7 p.m., and a funeral Mass Celebrated on Saturday, February 8, at 11 a.m. at St. Joachim's Church in Rockport, Mass. Burial will be held in the Beech Grove Cemetery in Rockport and will follow the funeral. Contributions in Mrs. Koechlin's memory may be made to New England Village, 664 School St., Pembroke, MA 02359. Funeral arrangements are by the Greely Funeral Home. Online condolences may be given at www.greelyfuneralhome.com.
Published on February 4, 2020
To send flowers to the family of Patricia Baker Koechlin, please visit Tribute Store.

Send flowers
in memory of Patricia

A place to share condolences and memories.
The guestbook expires on May 03, 2020.

Henry, Fran and the Moss family

Basket of Memories was purchased for the family of Patricia Baker Koechlin by Henry, Fran and the Moss family.  Send flowers