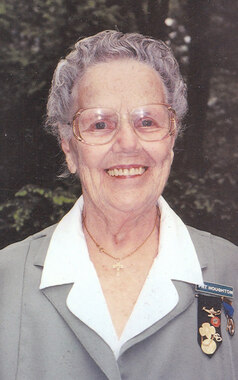 Back to Patricia M.'s story

Patricia M. (Mulally) Houghton, 92, passed away in her home on November 23, 2017. She was the wife of the late Warren W. Houghton.
Born in Danvers on February 25, 1925, she was the daughter of the late Charles and Mabellle (McPhee) Mulally. Patricia was raised and educated in Danvers and graduated from Holten High School. She and her husband moved to Manchester-by-the-Sea in 1953. She was extremely active in her community. She was a lifelong American Legion Member, serving as chaplain and twice as President of the Legion Auxiliary. She was a lifelong Girl Scout, and was leader for many years. Patricia was a communicant and Eucharistic Minister at Sacred Heart Church and served as a Eucharistic minister and Rosary leader at Blueberry Hill Nursing Home. She enjoyed square dancing and was a member of the Gloucester Skippers. She was also an equestrian and enjoyed photography.
She is survived by her children, Charles Houghton and his wife, Joan, and William Houghton, all of Manchester-by-the-Sea, and Patricia Wojahn and her husband, Kevin of Idaho; six grandchildren, Hayley, William, Thomas, Christine, Michael and Chandelle; and a great-grandson, Kenny. She was predeceased by her identical twin, Virginia Mulally; and her four brothers, Richard, Robert, James, and Charles.
Her Funeral Mass will be celebrated at 10 a.m. on Wednesday, November 29, 2017, in Sacred Heart Church, 62 School St., Manchester-by-the-Sea. Burial will follow in Pleasant Grove Cemetery. Visitation will be held on Tuesday from 4 to 7 p.m. at C.R. Lyons & Sons, Funeral Directors, 28 Elm St., Danvers. In lieu of flowers, donations may be made in Patricia’s name to Gaits of Harmony, Therapeutic Riding, P.O. Box 21, W. Kingston, RI 02892; or to Girl Scouts of Eastern Massachusetts, Camp Scholarship Fund.
For information, visit www.LyonsFuneral.com.
Published on November 27, 2017
To plant a tree in memory of Patricia M. Houghton, please visit Tribute Store.

Plant a tree in memory
of Patricia M.

A place to share condolences and memories.
The guestbook expires on May 25, 2018.