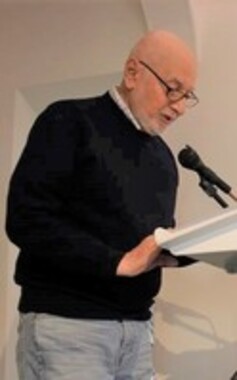 Back to Peter's story

Gloucester, MA - Peter Anastas, the Gloucester writer, social worker and community activist, died peacefully at Seacoast Nursing and Rehabilitation Center on December 27, 2019. In his last days he was surrounded by his family, close friends and the Gloucester people he so loved.
Peter Nicholas Anastas, Jr. was born in Gloucester, Massachusetts in 1937. He attended local schools, graduating in 1955 from Gloucester High School, where he was president of the National Honor Society and edited the school newspaper. His father Panos "Peter" Anastas, who owned and operated the Boulevard Sweet Shop on Western Avenue and later Peter's, a luncheonette and grocery store on Rocky Neck, was born in Sparta, Greece in 1899 and emigrated to America in 1908, working his way from day laborer to business owner. His mother, Catherine Polisson, was born in Gloucester of native Greek parents, in 1910. After graduating with honors from Gloucester high-school, she worked as a private secretary for Clarence Birdseye, alongside her husband at his restaurants, and returned from a short retirement to a second career working for Dr. Warren Babson and for the NOAA/National Marine Fisheries offices in Gloucester. His brother, Thomas Jon "Tom" Anastas, a jazz musician, arranger and composer who toured with Woody Herman's big band The Thundering Herd, was born in Gloucester, in 1939, and died in Boston, in 1977, shortly after retiring from touring to teach at Berklee College of Music in Boston.
Anastas left Gloucester to attend Bowdoin College, in Brunswick, Maine, on scholarship, majoring in English and minoring in Italian, philosophy and classics. While at Bowdoin, he wrote for the student newspaper, the Bowdoin Orient, and was editor of the college literary magazine, the Quill. In 1958, he was named Bertram Louis, Jr. Prize Scholar in English Literature, and in 1959 he was awarded first and second prizes in the Brown Extemporaneous Essay Contest and selected as a commencement speaker.
After graduating from Bowdoin in 1959, Anastas lived in Florence, Italy until 1962, where he studied medieval literature at the University of Florence and taught English at the International Academy. While in Florence, Anastas worked as an interpreter-translator at the university's Institute for Physical Chemistry. His translation of Prof. Giorgio Piccardi's The Chemical Basis of Medical Climatology, was published in the U.S. in 1962.
Returning to Gloucester in 1962, Anastas taught English at Rockport High School and Winchester (Mass.) Senior High School before winning a graduate teaching fellowship to Tufts University, where he studied English and American literature, receiving a master's degree in 1967 with a thesis on the concept of place in the works of Henry David Thoreau.
Between 1967 and 1972, Anastas worked as a free-lance writer, and published his first book, Glooskap's Children: Encounters with the Penobscot Indians of Maine (Beacon Press, 1973), which combined reporting, personal testimony, Native American myth and portrait photography to document the plight of the contemporary Penobscot people in Maine. As a result of his experience of poverty in rural Maine while doing research for the book, Anastas joined the staff of Action, Inc., Gloucester's antipoverty agency, in 1972, where for thirty years he was a social worker and became the agency's Director of Advocacy & Housing. For twenty years, between 1972-1992, he was also an adjunct faculty member at North Shore Community College, where he taught English composition and English and American literature.
Anastas continued to write and publish throughout his life, contributing a weekly column, "This Side of the Cut," to the Gloucester Daily Times (1978-1990) and publishing nine books, including When Gloucester Was Gloucester: Toward an Oral History of the City (with Peter Parsons), Landscape with Boy, a novella in the Boston University Fiction Series; and Maximus to Gloucester, an edition of the letters and poems of Charles Olson to the editor of the Gloucester Times. In 2013, Lost & Found Books at CUNY Graduate Center, NYC co-published A Walker in the City: Elegy for Gloucester, a selection from Anastas' newspaper columns in the Gloucester Times. His papers and correspondence, including material related to the historian Joseph E. Garland and the poets Charles Olson and Vincent Ferrini, are preserved in the Peter Anastas Collection at the Cape Ann Museum in Gloucester.
Anastas was married to Dr. Jeane Wiener Anastas from 1964 to 1972. The couple had three children: Jonathan, marketing executive who resides in Los Angeles, California; Rhea, an art historian, writer and curator, currently teaching UC Irvine; and Benjamin, also a writer, who has published fiction, journalism and memoir, and is on the Literature Faculty at Bennington College. He is also survived by his loving partner of thirty-three years Judith Winslow Walcott, a retired teacher and reading specialist, and by Judy's daughters Betsy Walcott, a neuroscientist and lecturer at the University of San Diego, and Diana Walcott, Admission and Development Director at the Apple Orchard School in Brookline. He was a proud and loving "Papou" to the six grandchildren he shared with Judy and kept their pictures near to him in his study.
There will be a memorial service this coming summer; all friends and family will be welcome. For more information, visit http://peteranastas.blogspot.com/ or write his family at peteranastasmemorial@gmail.com
In lieu of flowers, those who wish may send donations in Peter Anastas' memory to The Sawyer Free Library (2 Dale Ave, Gloucester, MA 01930) or Action, Inc. (180 Main Street, Gloucester, MA 01930).
Published on December 31, 2019
To plant a tree in memory of Peter N. Anastas, Jr., please visit Tribute Store.

Plant a tree in memory
of Peter

A place to share condolences and memories.
The guestbook expires on March 29, 2020.

Jim and Judi Masciarelli
Once could not ask for better neighbors and friends, Peter and Judy.
Peter's character, intellect, authenticity and generosity will remain in our hearts. Hugs to Judy Wolcott.
Hank Fellows
What a great Son of Gloucester! He spoke and wrote so eloquently of this great City, and has in turn become part of its pantheon of legends!
Lois budrose
Peter’s wonderful stories of childhood adventures when Gloucester was Gloucester instilled in me a fierce love of our city. He was the salt of the earth, the real deal. My sincerest sympathies go out to Judy and his family.
Mike Bowie
What a wonderful and great man. What a wonderful and great friend. Always in my corner. My condolences to Ben and the entire family.
View all