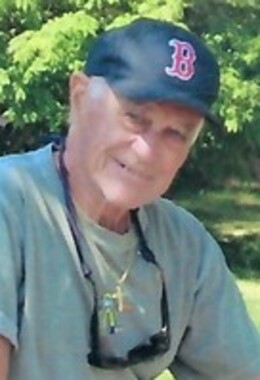 Back to Peter's story

Manchester-by-the-Sea, MA - Peter F. Petras, 88, of Manchester-by-the-Sea, MA, passed away in the Kaplan Family Hospice House in Danvers on January 11, 2020. Peter was born in Lynn, MA on June 29, 1931 and was the son of the late Frank and Anthippe (Armarda) Petras.
Peter was a graduate of Lynn Classical High School, where he played right guard for the football team. He was lucky enough to play ball with Harry Agganis, who later went on to fame playing for the Boston Red Sox. He continued his studies at Curry College and received an Associate's Degree as a Dental Technician. Peter went on to pursue a career in the dental field, primarily as a salesman for several major dental supply companies. His work often required long hours of travel, including regular trips throughout New England and Canada. His trips to Canada, allowed him to take his family to visit Montreal several times. Peter was also lucky enough to visit his homeland of Greece in his later years and re connect with distant relatives.
His prized Peonies and delicious garden tomatoes were always under his watchful, nurturing eyes and he loved tending his garden at the Plains in Manchester where he lived for the last 20 years. In the 1970s Peter owned a Boston Whaler and enjoyed fishing and pulling a few lobster traps with his sons, off the waters of Hull, MA. Peter continued that love of fishing in the waters of Manchester by the Sea and could often be seen reeling in stripers in Manchester Harbor.
Peter was a fun loving, gentle guy who loved to live life to the fullest. His favorite saying was "do what makes you happy". His children and grandchildren were a loving part of his days, and his Golden Retriever mix, Lucy was his heart and soul, and major companion in his later years. He is survived by his sons Frank and Peter, his grandchildren Alex, Olivia, Lindsay and Abby, his Brother James (Seattle), daughter in laws Jenn and Lisa and his former wife Anne.

There are no services at this time, but a Celebration of his life will be held in late Spring at Tuck's Point in Manchester-by-the-Sea. In lieu of flowers, contributions may be made in his memory to: North Shore Animal Shelter, 347 Highland Avenue, Salem, MA 01970 or Trustees of Reservations, 200 High St. Boston, MA 02110. Arrangements are by the Greely Funeral Home, 212 Washington St. Gloucester. Online condolences may be given at: www.greelyfuneralhome.com
Published on January 13, 2020
To send flowers to the family of Peter F, Petras, please visit Tribute Store.

Send flowers
in memory of Peter

Joyce dorlando
To all of PeterS family. My deepest condolences at this saddest of times.
View all