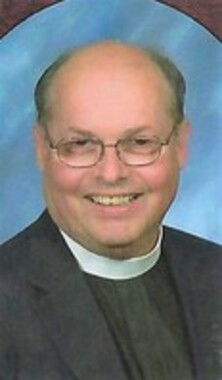 Back to Rev. Charles's story

Northampton and Rockport - The Rev. Charles Henderson III, 73, passed away peacefully on December 13, 2019, at his home in Rockport.
He was born on August 13, 1946, in Lawrence Massachusetts, son of Charles Henderson Jr. and Ethel (Bolton) Henderson. Charles was educated at Middlesex Academy in Concord, Massachusetts where he played halfback on the football team. He graduated with a B.A. in English from the University of North Carolina at Chapel Hill and received his Masters of Divinity from Gordon Conwell Theological Seminary in Hamilton, Massachusetts. He served as a medic in the Army during the Vietnam War.
Charles was ordained in the Anglican Church in Newfoundland, Canada, where he served as rector of several churches before moving to Adams, New York, where he served for sixteen years as rector of Emmanuel Episcopal Church and its sister parish, Zion Church in Pierrepont Manor, New York. He was wholeheartedly dedicated to his work as a pastor and teacher and was much loved by his church congregations. After his retirement he and his wife moved to Northampton, and three years later also bought a condo in Rockport, which became a part-time home. Between these two towns he participated actively in several church communities. In addition to his ministry Charles was involved in many other creative pursuits. He loved painting, especially landscapes featuring his beloved Rockport, and he enjoyed writing and cooking.
Charles is survived by his wife, Elise, his son, Charles Abbot Henderson, his daughter Abigail Collins Henderson, and three granddaughters, Eleanor, Jacqueline and Madeline. He is also survived by four siblings: Elizabeth Kilduff of Rockport; William Henderson of Anniston, Alabama; Rosalie Godfrey of Dover Point, N.H.; and John Quintus Henderson of Center Barnstead, N.H.
Private burial will be held in Rockport at the convenience of the family and memorial services will be held at a later date. In lieu of flowers, the family requests that contributions be made to Pigeon Cove Chapel, 155 Granite Street, Rockport Massachusetts, 01966. Arrangements are being handled by the Greely Funeral Home in Gloucester. On-line condolences maybe given at: www.greelyfuneralhome.com
Published on December 19, 2019
To plant a tree in memory of Rev. Charles Henderson III, please visit Tribute Store.

Plant a tree in memory
of Rev. Charles

Kim Ross
I am so sorry! He was so loved by all of us! Will miss him!
Patricia Collins
Chip was a kind and wonderful Rockport neighbor. He will be greatly missed by the Anchorage Townhouse Community where he was very active on the board of directors.
View all