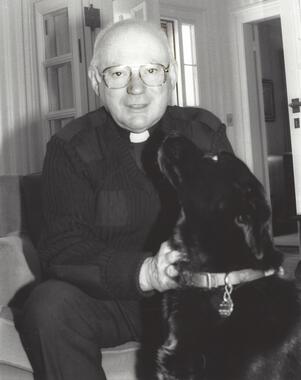 Back to Rev. Richard A.'s story

Reverend Richard Albert Driscoll, 91, of Topsfield, died Sunday, April 24, 2016, at the Veterans Administration Hospital in Bedford.
Born in Melrose, he was the son of the late Walter L. Sr. and Anne J. (Shepherd) Driscoll. He was raised and educated in Medford and was a graduate of St. Joseph Grammar School, Boston College High School and Medford High School.
He entered the United States Army in 1943, served in the South Pacific during World War II, and completed his duty in 1946. He was a proud and loyal veteran.
Father attended Boston College from 1947 to 1948 and entered St. John’s Seminary in 1949. He was ordained February 2, 1955, by Archbishop Richard J. Cushing.
Father Driscoll’s early assignments were at Our Lady of Good Voyage in Gloucester, St. Mary Star of the Sea in East Boston, the Immaculate Conception Church in Salem and St. Patrick’s Church in Stoneham. Following these assignments, he was appointed Catholic Chaplain of Salem Hospital. He was next assigned to St. Rose of Lima Parish in Topsfield and named Administrator in 1984. He was appointed Pastor of St. Rose of Lima by Cardinal Bernard Law in 1986. He would remain Pastor of St. Rose until his retirement in 1999.
During his tenure as Pastor at St. Rose of Lima Parish in Topsfield, Father Driscoll would oversee the design and construction of the new Sanctuary and usher in a new and prosperous time in his parish. Along with parish affairs Fr. Driscoll was also involved in civic and ecumenical circles. He was active in the Tri-Town Clergy Association and worked hand-in-hand with his fellow clergy throughout the north shore, spreading the word of God. He was designated chaplain of the American Legion Post 255 in Topsfield and was an active member well into his 90th year. He was a member of Post #1524 Veterans of Foreign Wars in Salem. During his lifetime, he maintained an active interest in Public Transportation, including a large collection of bus, trolley and steamship items.
Although originally from greater Boston, Father Driscoll would ultimately consider himself a man of the North Shore of which he was very proud. The Town of Topsfield truly became his home and he endeared himself to all. He had a love of traveling the coast, from Salem to Portland, Maine. He spent many summers with his family in Searsport as a young man and found great solace sitting by the rocky coast with his beloved canine companion Dutchess in his later years.
In his retirement, father continued his ministry assisting in various churches on the North Shore, including St. Margaret’s Church in Beverly Farms and St. Agnes Church in Middleton. He taught CCD classes at St. Rose and sponsored a child in Colombia, India, and in the Philippines. He was a dedicated servant of the Lord and loved to help those in need. His outgoing and friendly nature enabled father to connect with young and old alike. He made friends wherever he traveled and always enjoyed sharing stories of his life with a smile on his face. Father Driscoll was a blessing to so many people and dedicated his life to his family, his country and his church. He was steadfast in his word and deed and was foremost about serving God and people. His legacy of faith, commitment and charity will be his everlasting hallmark.
Fr. Driscoll is survived by his nephews, Stephen W. Driscoll, Robert S. Driscoll Jr. and David Driscoll; his dear friends, Annmary Connor and Thomas Butzen and their boys, Mary Connor, Deborah and Paul Irwin, Corrinne Roberts, George and Claire Zeiba and John and Dorothy Arathuzic; and many cousins. He was the brother of the late Reverend Walter L. Driscoll Jr, Robert S. Driscoll; and uncle of the late Thomas N. Driscoll. He fondly spoke of his late Aunt Rosalie Davis. Fr. Driscoll leaves behind many dear friends and parishioners who will forever lovingly, graciously and spiritually remember him.
Father received great courtesy in his final days by the nurses, social workers, staff and doctors at the Veterans Administration Hospital in Bedford. His family and friends are eternally grateful for their compassionate care.
His funeral Mass will be celebrated in St. Rose of Lima Parish, Park Street, Topsfield, Thursday, April 28, at 11 a.m. Relatives and friends invited. Burial in Pine Grove Cemetery, Topsfield. Visiting hours in the Peterson-O’Donnell Funeral Home 167 Maple Street (Route 62), Danvers, Wednesday, April 27, from 2 to 7 p.m. In lieu of flowers, donations can be made to the St. Vincent De Paul, Care Of St. Rose of Lima Parish, 17 Prospect Street, Topsfield, MA 01983, or to your local St. Vincent De Paul Society. To share a memory or offer a condolence, please visit www.odonnellfuneralservice.com.
Published on April 26, 2016
To plant a tree in memory of Rev. Richard A. Driscoll, please visit Tribute Store.

Plant a tree in memory
of Rev. Richard A.

A place to share condolences and memories.
The guestbook expires on July 31, 2016.