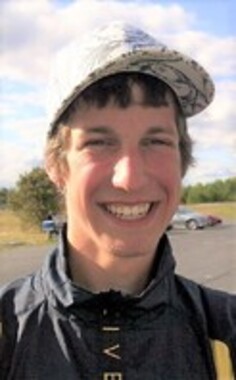 Monson MA & Magnolia MA - Reynir Jon Aegisson, 29, of Monson, Mass., formerly of Magnolia, passed away on Sunday November 17th, 2019.
Reynir was born in Melrose,on May 14, 1990 and was the son of Aegir Thor and Jan (Dodge) Jonsson. He graduated from Manchester/Essex Regional High School and started working as a machinist for Machine Technology in Beverly before they moved into Magnolia. They make precision parts for electronic, high tech, nuclear, aerospace use. He was a staunch supporter and fundraiser for the Magnolia Pier Project and enjoyed working with everyone involved. An avid outdoorsman, he loved skiing and mountain biking in the White Mountains with his dad, and traveling with him to Iceland and hiking there as well. He was a member of the Magnolia Bike Club and enjoyed camping throughout New England. What he absolutely loved doing, and became absorbed in, was working on his dad's racing car, a Mustang Cobra. He actually took the car apart to do repair work and put it all back together. They did drag racing at New England Dragway, autocrossing at Devens and road course racing at N.H. Motor Speedway in Loudon NH. He had a cat named Tazz, that has since passed, but he told stories about him being almost humanlike, that were quite humorous and entertaining and they never grew old. His two living cats, Leonard and Lucy are going to miss him very much. Reynir is survived by his parents, Aegir and Jan; his sister Elsa Johanna Aegisdottir Foote and her husband, Ryan of Gloucester; his former girlfriend Anya Baker, who has remained a very dear friend, and many cousins in the states, Iceland and Canada.
There are no visiting hours. His Mass will be celebrated on Monday, November 25 at 10 a.m. in St. Ann's Church, Holy Family Parish, Gloucester. His burial will follow in Dolliver Memorial Cemetery in West Gloucester. Family and friends are cordially invited. Online condolences may be given at: www.greelyfuneralhome.com.
Published on November 21, 2019
To plant a tree in memory of Reynir Jon Aegisson, please visit Tribute Store.

Plant a tree in memory
of Reynir

Harry Zhang
I heard this sad news from a former colleague from the place where we all used to work with Aegir. As a parent of 2 sons, I could not image how sad it was for a father who lost a young son. I pray that the young man will rest in peace, and the family will stay strong while copying with their loss.
Donna Robinson
Most sincere sympathies on your loss.

Love's Tapestry was purchased for the family of Reynir Jon Aegisson.  Send flowers