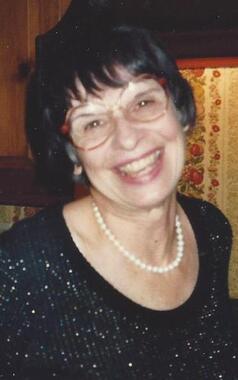 Back to Rita Ann (Marotta)'s story

Mrs. Rita Ann (Marotta) Stevens, 90, of Boxford, beloved wife of the late John Stevens, died Monday, November 13, 2017, at Courville Nursing Home in Manchester, N.H.
Born in Boston, she was the daughter of the late George and Alpha (Bruno) Marotta. She was raised and educated in Malden and was a graduate of Malden High School. She continued her education at Secretarial School in Boston.
Mrs. Stevens was a woman ahead of her time and entered the working world as a young woman. She was full of determination and confidence and it propelled her to earn the respect and trust of many. She began her career in the Insurance Industry as a secretary working in Boston. Through her work she met the love of her life, John, whom she often did business with at his Bank. She became an executive secretary and following marriage moved on to work at Merrimack College in North Andover.
For many years she was associated with Family Bank in Topsfield. She rose through the ranks of the Bank and earned many awards and citations for excellence of performance. She made many lifelong friends working at the Bank and took great pride in her job. She always had extra time for her customers and often they would become friends. Professionally she was honest, trustworthy and determined. More recently she was associated with QA Technologies in Hampton, N.H., and Northeast Dermatology where she worked until her retirement at the age of 81. She loved to be a productive member of the professional world.
A loving wife, mother and grandmother, Rita was devoted to her family and friends. She took great pride in her home and garden. She enjoyed hosting garden parties and dinner parties at their home in Boxford. Her true pride and joy was her garden and she spent countless hours perfecting its beauty. Her artistic eye was also focused on her home. She loved interior decorating and creating a warm and inviting atmosphere for her family. She was an avid reader and writer in her spare time.
A longtime resident of the Town of Boxford, Rita enjoyed traveling overseas. She visited Italy, Germany, Portugal and many other countries. She even took multiple generations to her ancestral home of Mirabella, Italy. Of this she was very proud. Yet even with an active professional career and social life, family always came first. She set a great example of how to make the most of every day to her children and grandchildren. She will be deeply missed.
Rita is survived by her daughter, Kathy Gibbons and her husband, Tom of Bedford, N.H.; her sons, John E. Stevens Jr. and his longtime companion, Valerie Rurack of Manchester, N.H., and Jeffrey Stevens and his wife, Melissa of Gloucester; her three grandchildren, Bridget Stevens and Kelly and Bryce Gibbons; her sister, Christine Gloria Dargie of Hampton, N.H.; and several nieces, nephews and many friends. She was the sister of the late George and Robert Marotta.
Her funeral service will be held in the Peterson-O’Donnell Funeral Home, 167 Maple St. (Route 62), Danvers, Saturday, Nov. 18, at 11:15 s.m. Relatives and friends invited. Burial in Village Cemetery, Boxford. Visiting hours prior to the service from 9 to 11 a.m. In lieu of flowers, expressions of sympathy may be made in Rita’s memory to the Joslin Diabetes Clinic, 1 Joslin Place, Boston, MA 02215. To share a memory or offer a condolence, please visit www.odonnellfuneralservice.com.
Published on November 15, 2017
To plant a tree in memory of Rita Ann (Marotta) Stevens, please visit Tribute Store.

Plant a tree in memory
of Rita Ann (Marotta)

A place to share condolences and memories.
The guestbook expires on May 13, 2018.