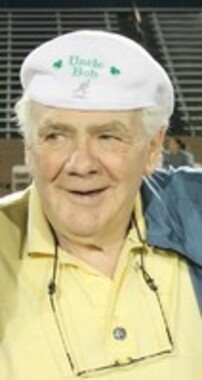 Back to Robert E.'s story

Gloucester - Mr. Robert E. “Uncle Bob” McGillivray, 88, of Gloucester, passed away on Saturday evening at home with his family at his side.

Uncle Bob was born July 1, 1930, in Gloucester, he is the son of the late Joseph and Helen (Crowley) McGillivray. He was a lifelong resident of Gloucester and a graduate of Gloucester High School class of 1947.

He was the owner and the operator of Noyes Movers for many years until his retirement. Uncle Bob previously worked on the Gloucester Waterfront.

He was a United States Army veteran serving during the Korean Conflict.

He received a Lifetime Achievement Award from the Democratic Party for a lifetime of dedication and commitment to the party, he campaigned tirelessly in support of equality and rights for all.

Uncle Bob’s visiting hours will be in the Pike-Newhall Funeral Home, 61 Middle St., Gloucester, on Wednesday evening, February 6, 2019, from 4 to 8 p.m. His funeral will be from the Pike-Newhall Funeral Home on Thursday morning, February 7, 2019, at 8:30 a.m. Uncle Bob’s Funeral Mass will be celebrated in Our Lady of Good Voyage Church, 142 Prospect St., Gloucester, at 9:30 a.m. Interment will be in Beechbrook Cemetery. Relatives and friends are respectfully invited. For online condolences and register book please visit www.pikenewhall.com.
Published on February 5, 2019
To plant a tree in memory of Robert E. "Uncle Bob" McGillivray, please visit Tribute Store.

Plant a tree in memory
of Robert E.

A place to share condolences and memories.
The guestbook expires on May 05, 2019.