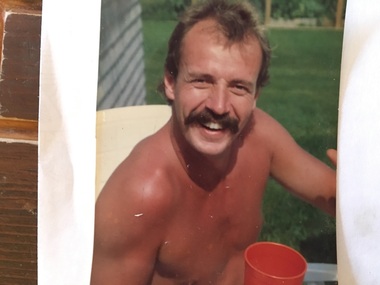 In Memoriam of Robert McLean Olson, 58 years young, of Gloucester and Rockport.
Rob passed away unexpectedly on March 8th 2017 of complications from multiple strokes.
Rob was a true character, loved and adored by everyone who knew him. A man with a heart and mustache the size of Texas. No matter what was happening in his life he managed to chuckle and find the humor in things. He always kept a positive attitude and had a willingness to help anyone who needed it. Everyone who knew Rob has a funny Rob story; he was just one of those guys that made life fun. Rob graduated from Rockport High School in 1976, and enlisted in the United States Coast Guard. During his time in the Coast Guard he spent a few years in paradise on the island of YAP. After the Coast Guard he spent years saltwater fishing in all parts of the world, except the Indian Ocean. He loved his family and the water fiercely. Rob even had a part in the film, The Perfect Storm. He married Rebecca, and got his daughter Ellie in the package. To complete the family, their son, Charley, was born soon after.

He worked as a carpenter and painter for years, and with his wife for her gardening and design business. Rebecca introduced him to the Adirondack Mountains and they spent a lot of time there exploring the wilderness with their family. Home with his family and friends is where he loved to be the most, whether watching a Patriots Game or sitting outside by a bonfire. Rob marched to the beat of his own drum, his mother once commented, “I think he even made the drum.”
Rob is preceded in death by his parents Thor and Jean Olson and nephew Michael Olson all of Rockport and is survived and surrounded by so many family and friends, his beloved wife Rebecca Olson, son Charley Olson and daughter, Ellie Olson all of Gloucester; brothers, Thor B Olson Jr, Jack Olson and wife Mary Jane, Rick Olson and wife, Nancy, Sisters Sue Waddell and husband, Bill, Sally Budrow and husband, Tom, Kathy Taylor and husband, Steve all of Rockport. Much beloved nephews Dan, Jeff, Tom, Jason and Kevin Olson, Greg Waddell and nieces, Jaci MacDowell, Amy Rose, Sara Turunen, Liz Harrington, Julie Brown, Thora and Niki Taylor.
Rob's family is having an informal gathering at The Crow's Nest on Saturday, March 11th, from 3 p.m. on. If you are unable to attend, there will be a funeral and celebration of his life that will be held at a future date for all of Rob’s family and friends.
In lieu of flowers, a YouCaring page has been set up for Rob's children.
www.YouCaring.com/Robskids.
Published on March 11, 2017
To plant a tree in memory of Robert Olson, please visit Tribute Store.

A place to share condolences and memories.
The guestbook expires on June 08, 2017.