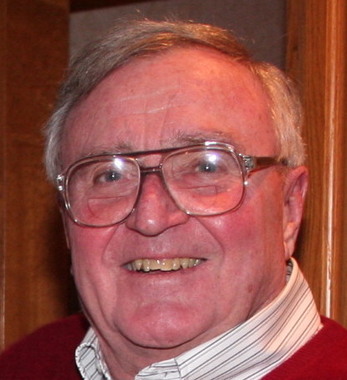 Back to Ronald W.'s story

Ronald W. Taylor, 84, the loving husband of Jane (Aneshansel) Taylor, with whom he shared 61 years of marriage, died peacefully surrounded by his family on January 27, 2017.
Born in Gloucester on June 13, 1932, he was the son of the late George and Ethel (Corcoran) Taylor. He was raised and educated in Gloucester and graduated from Gloucester High School in 1950. He then went on to Duke University where he first met his future wife and earned a Bachelor’s degree from Duke University. After graduation Ron served as a pilot and officer in the United States Air Force where he served for three years. He later became the owner of several Budget Rental Car agencies in the local area. He was active in his community. He served on the Finance Committee for the town of Danvers and Saint Richard Parish, he was a member of the Rotary Club, and served on the North Shore Committee Council.
Ron was his grandchildren’s greatest fan, attending all of their sporting events, school plays, concerts, award ceremonies and graduations. He also was the PA announcer for many of the St. John’s Prep football games, where his sons attended. He enjoyed boating and served as the Launch Commander at the Manchester Yacht Club. As a power squadron instructor, he taught many north shore residents the importance of safe boating. Ron was renowned for his model train collection and knowledge of all things railroad.
In addition to his wife, Jane, he is survived by four children and their spouses, Carla and Tom Powers of Danvers, George and Marianna Taylor of Scituate, Greg and Suzy Taylor of Ohio and Jennifer and Scott Webster of Danvers; nine grandchildren, Kevin, Dan and Brian Powers, Nick and Emma Taylor, Kelsey and Alex Taylor and Julie and Ryan Webster. He was predeceased by his brother, Robert Taylor.
He will be deeply missed by his family and friends.
His Funeral Mass will be celebrated at 9 a.m. on Tuesday, January 31, 2017, in Saint Richard Church, 90 Forest St., Danvers. Burial will follow in Annunciation Cemetery, Danvers. Visiting hours are Monday from 4 to 7 p.m. at C.R. Lyons & Sons, Funeral Directors, 28 Elm St., Danvers. In lieu of flowers, expressions of sympathy may be made in Ron’s name to Care Dimensions, 75 Sylvan St., Danvers, MA 01923. www.LyonsFuneral.com.
Published on January 28, 2017
To plant a tree in memory of Ronald W. Taylor, please visit Tribute Store.

Plant a tree in memory
of Ronald W.

A place to share condolences and memories.
The guestbook expires on July 26, 2017.