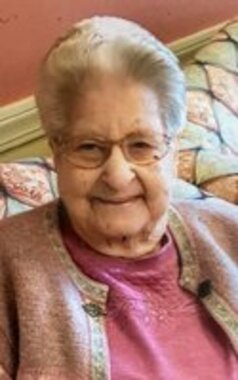 Back to Sallie's story

Gloucester - Sallie (Reeves) Ward Connor, formerly of Elizabeth Road, Gloucester, died peacefully on Thursday, January 23, 2020, at Hospice at the Gloucester Healthcare Center in Gloucester. Sallie was born in Nakina, N.C., she was the daughter of the late Mr. John Morgan and Fannie (Hardwick) Reeves. She moved to Gloucester in 1977 and resided with her daughter, Ann Greeke and her late son-in-law Donald Greeke.
She was a loving and devoted mother and grandmother, sister, and friend. Sallie came from a large family in North Carolina and was proud of her roots. She loved to tell stories about growing up on the farm.
Sallie worked at Gorton's of Gloucester for 15 years and loved her job and the people she worked with until she was forced to retire after she had a bad fall. Sallie was a member of her church, The Gloucester Assembly of God. Sallie rarely missed an opportunity to attend church, bible studies and fellowship times. She loved her church and the people she prayed for on a daily basis. Sallie never missed sending birthday cards to her friends and family. Her cards were always loving and inspiring. She was a nursery teacher for many years and loved all the babies she cared for. She also was a member of a senior "Sonshiners" group at the church that would get together for prayer, and daytrips, shopping and luncheons. She was a great southern cook and she was well known for her Banana Pudding.
She is survived by her two daughters, D. Ann Ward Greeke of Gloucester, and Carol Ward Maciel of San Antonio, Texas; one sister, Mabel Reeves Blanton of Wilmington, N.C.; one sister-in-law, Evelyn Smith Reeves of Nakina, N.C.; four beloved grandchildren, William Greeke of Gloucester, Ricardo K. (Donna) Ramirez of Bogata, Texas, Esteben III (Sonya) Ramirez and Carrie (Christopher) Michaud all of San Antonio, Texas; nine great-grandchildren, Joshua and Mallory Greeke of Gloucester, Veronica R. Ramirez, Esteben Ramirez IV, Heather R. Tompkins, Casey J., Aaron C. and Nikia M. Michaud, all from Texas; six great-great-grandchildren, Naomi, Alexa and Jorge Garza, all of Texas, Esteben V and Kylrissa Ramirez and Jayden Michaud all of Texas, and many beloved nieces and nephews. She was predeceased by her parent; her two sons-in-law, Donald E. Greeke and Dick Maciel both, formerly of Gloucester' her two daughters' father, J.W. Ward, formerly of N.C.; and baby Naomi Ramirez, formerly of Texas.
Sallie is the 12th child of 14 siblings. She was predeceased by six brothers, J. Doss, Austin, Preston, Paul, Leo and Carl Reeves, formerly all of N.C.; and six sisters, Lettie White, Mae McKeithan, Allie Stanley, Dana Todd, Lena Russ, and Evelyn Gentry, formerly all of N.C.

Her funeral service will be held at the Gloucester Assembly of God Church, 211 Washington Street, Gloucester, on Tuesday, January 28, 2020, at 11:30 a.m. Relatives and friends are invited to attend. Burial at Dolliver's Cemetery, Gloucester. A visiting hour will be held prior to the service at the Campbell Funeral Home, 61 Middle Street, Gloucester, on Tuesday, January 28. 2020, from 10 to 11 a.m. In lieu of flowers, donations in Sallie's name may be made to Care Dimensions, 75 Sylvan Street, Suite B-102, Danvers, MA 01923. Information, directions, condolences at www.campbellfuneral.com.
Published on January 25, 2020
To send flowers to the family of Sallie (Reeves) Ward Connor, please visit Tribute Store.

Send flowers
in memory of Sallie

A place to share condolences and memories.
The guestbook expires on April 23, 2020.

Wendy Hyatt
I enjoyed getting to know Sallie during visits to the nursing home with my church. My prayers are with your family. I know Sallie is rejoicing with Him.
Sandra Guelpa
Sally was such a nice person. So sorry about her passing.
Joanne gallo
Anne.
So sorry for your loss
View all