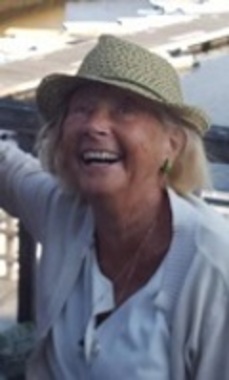 Back to Sonia's story

Beverly - Sonia (Reitz) Nichols, 92, of Beverly, formerly of Manchester-by-the-Sea, beloved wife of the late Wendell L. Nichols, passed away Monday evening, December 31, 2018, at the Ledgewood Rehabilitation and Skilled Nursing Home in Beverly.
Born in Bois-Colombes, France, she was the daughter of the late Leon and Princess Nathalie Kourakine-Ouroussow) Reitz.
Sonia had worked as a stewardess with TWA for a few years, prior to being a decorator for store windows, before her marriage in April of 1950.
A member of the Essex County Club since 1983, she enjoyed swimming at the club for many years. Sonia was also an avid reader and enjoyed going to the movies. She was also a lover of the Arts and an avid tennis player. Sonia and her husband Wendell loved skiing in Switzerland so much that they built a chalet in Switzerland 50 years ago. Sonia enjoyed walking on the beach and in the mountains.
Surviving her are three daughters, Anne K. Morin of Lausanne, Switzerland, Natasha Lalonde of Paris, France, and Patricia Lloyd Lambe of Paris, France; one son, Lloyd Nichols II and his wife Karen of Ft. Meyers, Fla.; six grandchildren, Xavier Morin and his wife Angelica, Charles Morin and his wife Isabelle, Alexia, Daphne and Tiphaine and Ella; six great-grandchildren, Anthea and Laszlo Morin, Oscar and Alix Morin and twins Chloe and Arthur.
Her funeral service will be held at St. John the Episcopal Church, 705 Hale Street, Beverly, on Friday, January 11, 2019, at 11 a.m. Relatives and friends are invited to attend. Burial in Pleasant Grove Cemetery, Manchester-by-the-Sea. In lieu of flowers, donations in Sonia’s name may be made to Friends of the Manchester Public Library, P.O. Box 652, Manchester, MA 01944. Arrangements by the Campbell Funeral Home, 525 Cabot Street, Beverly. Information, directions, condolences, at www.campbellfuneral.com.
Published on January 9, 2019
To plant a tree in memory of Sonia Nichols, please visit Tribute Store.

Plant a tree in memory
of Sonia