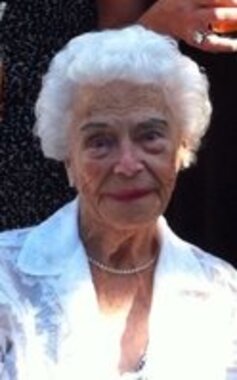 Back to Ursula's story

Gloucester - Ursula P. Sonia Mitchell, age 96, died on Thursday, January 24th, 2019 at Seacoast Nursing Home after a brief illness. She was born in Gloucester on March 5, 1922 to Everett and Katherine (Dower) Sonia.
She attended local schools, and was active in Glee Club musicals. In 1947, she married D. Albert “Dal” Mitchell, and joined him in his music career. Ursula worked in several local restaurants, and later in her career she worked at Mal’s department store and Nelson’s clothing store.
Ursula was widowed in 2002 when her adored husband Dal passed away. She was mother to four devoted children: the late Patricia J. Hurley of Foxboro, D. Albert (Albie) Mitchell and his wife Theresa (Madruga), Paul B. Mitchell and his wife Ann (Conigliari), Robert A. Mitchell and his wife Deborah (St. Cyr), all of Gloucester. She was beloved Nana to grandchildren Karen Hurley of Methuen, Maureen Hurley of Dedham and her wife Mary Ann O’Hara, the late Carolyn “Lynn” Neill of Lowell, Kimberley Hurley of Trumbull, CT, Michael Mitchell of Rockport and Renee Koll, Melissa Francis and her husband Jeffrey, Stephanie Silva and her husband Jarrod of Gloucester, the late Hilary Ryan and her husband Kyle of Rockport, Jason Mitchell and Michael Burbank, of Gloucester, and Katherine Slom and her husband Kevin of North Andover.
Ursula’s large family also consisted of sixteen great-grandchildren: David Olsen, Jr. of Malden, Matthew Olsen and his wife Michelle (Toomey) of Burlington, Katherine Olsen of Dedham, Carolyn Neill of Bridgewater, Kelsey Cusack of Medford, Laurie Cusack of Methuen, Elizabeth Hurley of Dedham, Tristan Morton of Trumbull,CT, Koll Merriman and Michael Mitchell of Rockport, Brayden and Cade Francis, Griffin and Brynn Silva of Gloucester, Autumn Slom of North Andover, and the late Ruby Ryan of Rockport. Her great-great-grandchildren are Hailey and Madison Olsen of Burlington, and Riley Reissfelder of Bridgewater.
Ursula was the beloved sister of the late Jean Asaro and her husband Peter, and Robert Sonia and his wife, Eleanor of Gloucester. She leaves niece Pamela Sonia and nephews, Gary Sonia and his wife, Frances of Rockport, and Peter Asaro and his late wife, Deborah of Gloucester, late nephew Steven Asaro. She is also survived by her great-niece,s Molly and Jenny Sonia and great-nephew, Ian Sonia.

Ursula was known far and wide for her wonderful sense of humor, and for being the kindest person one could ever hope to know. She leaves many very close friends who, along with her family, will miss her terribly.

Visiting hours for Ursula will be held from 4 to 7 p.m. Monday, January 28th at the Pike Newhall Funeral Home, 61 Middle St. Gloucester. Her Funeral Mass will be celebrated at 11 a.m. on Tuesday January 29th at St. John the Baptist Catholic Church, 52 Main St., Essex. All family and friends are welcome to attend. For online condolences and register book please visit www.pikenewhall.com.
Published on January 26, 2019
To plant a tree in memory of Ursula P. Sonia Mitchell, please visit Tribute Store.

Plant a tree in memory
of Ursula

A place to share condolences and memories.
The guestbook expires on April 25, 2019.