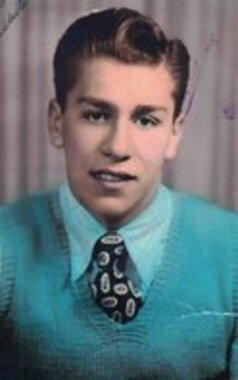 Gloucester - Walter D. Chianciola Jr., 90, of Gloucester, passed away on Sunday, February 17, 2019. He was the husband of the late Constance T. “Dolly” (Blancato) Chianciola.
Walter was born June 7, 1928, in Gloucester, and was the son of the late Bartalo and Antoinette (Frontiero) Chianciola. He was a lifelong resident, and he loved this city.
At a young age, Walter started fishing as a doryman and worked on the wharf. He was a lean machine with a great deal of physical strength. Sometime, later, he enlisted in the United States Marine Corps. Upon returning home from the service, Walter fished in and out of Gloucester. Later on he met Dolly, married and started his family. Walter was hardworking and always had side hustles going on to make ends meet. In his free time, he enjoyed horse racing, football, whittling, wood/leather crafts and baking. He especially loved blueberry picking and making blueberry muffins, actually blueberry everything. Now and again, he whipped up homemade ice cream and lemonade during the summer months.
The majority of Walter’s employment was with Crease and Cook, a leather tannery, for 24 years. Once he retired, Walter collected natural floral embellishments, in and around Gloucester’s environment for local and out-of-town florists. He loved the outdoors, writing poems, listening to music and talking to people.
In Walter’s later years, he frequented the local library reading about the lives of Gloucester people. He collected most of Robert DeNiro’s movies, as he was Walter’s favorite actor. He nicknamed himself DeNiro. You could see Walter out and about this city bombing around, in his white Chevy Cobalt until age 90, visiting local businesses. Second Glance, a thrift store, was his favorite place to go to buy supplies for his craft projects. He also used his Chevy to chauffeur people around.
Sadly however, Walter had developed a disorder in his adult life unbeknown to his family initially. It progressed through his retirement years and at times affected his relationships with family, friends, and the community. So at this time Walter’s family is taking the opportunity to apologize to anyone who may have been offended in any way.
Deep down Walter was a good person and he did some very nice things for people along the way. He was blessed to live a long, active life. He seemed unstoppable until he entered the Seacoast Nursing and Rehab center in Gloucester until his last dreadful day there.
He will be missed by his family, who finally understood and accepted his personal and medical struggles. Dad, Grampy, you can now rest in peace.
Walter leaves behind his daughters Susan and her husband Limmie, April and Jennifer; his grandchildren Greer and husband Julien, Steven, Trew and Ryan; his great-grandchildren Samario, Amore, Laurie Kay, and Juliana. He is also survived by his sister-in-law Rose; nieces, nephews and friends.
Walter was predeceased by his brother Bennie.

Walter’s Funeral Service will be in the Pike-Newhall Funeral Home, 61 Middle St., Gloucester, on Friday, March 1, 2019, at 10 a.m. There will be a time of visitation on Friday beginning at 9 a.m. Honoring Walter and family’s wishes, please omit flowers. Interment will be in Calvary Cemetery. For online condolences and register book, please visit www.pikenewhall.com.
Published on February 26, 2019
To plant a tree in memory of Walter D. Chianciola Jr., please visit Tribute Store.

Plant a tree in memory
of Walter

A place to share condolences and memories.
The guestbook expires on May 26, 2019.