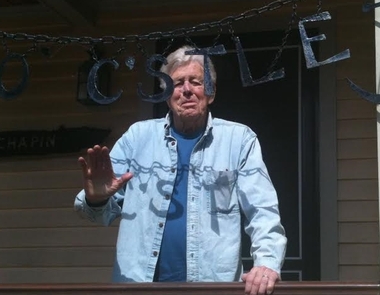 Back to William A.R.'s story

William "Bill" Andrew Robertson Chapin passed peacefully in the presence of his four children on January 3.
Born March 26,1924, in Springfield, Mass., he had been a Gloucester resident since 1985. Bill was a prolific poet, an intrepid sailor, an enthusiastic pianist and a bass in church choirs. Dedicated to public service, he was an active member of numerous community organizations and philanthropic associations.
Bill was an active member for over 30 years at St John's Episcopal Church in Gloucester and gave generously to various aspects of that community. Bill served on the Finance Committee of St John's Church and was chiefly involved and interested in the Outreach Program of the church. Bill was a prominent member of the Men's Church Group which was very important to him in his later years.
Committed to public service in his community, Bill was a devoted volunteer at the Addison Gilbert Hospital.
Growing up, Bill spent summers on Campobello Island in Canada, attended Classical High, Springfield, Mass., and graduated from Manlius Military Academy, Manlius, N.Y. He served in the U.S. Coast Guard from 1943 to 1946 and graduated from the University of Vermont in 1952.
Married to Constance Meehan Chapin in 1954, he raised his family in Cazenovia, N.Y., and Hingham, Mass., while working as a development director in the arts, education and medical communities until he retired from Lahey Clinic in Burlington, Mass., in 1993.
Bill was predeceased by his brother, Richard Shepard, and his two sisters, Patricia Anne and Carole Louise. He leaves his wife, Karen; three daughters, Elizabeth, Annemarie Smith and her husband, Scott, and Susan; son, John and his wife, Mary; three nieces and three nephews, eight grandchildren, and three great-grandchildren.
Bill frequently said, "My family is my legacy."
A memorial service and reception to celebrate the life of Bill will be held on Saturday, April 30, at 12:30 p.m. at St. John's Episcopal Church, 48 Middle Street, Gloucester. Memorial donations may be sent in Bill's name to St. John's Episcopal Church, Gloucester, or Addison Gilbert Hospital.
Published on April 27, 2016
To plant a tree in memory of William A.R. Chapin, please visit Tribute Store.

Plant a tree in memory
of William A.R.

A place to share condolences and memories.
The guestbook expires on July 31, 2016.