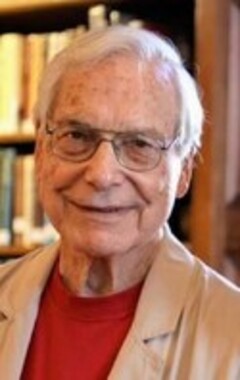 Rockport, MA - William (“Bill”) Rockett Houghton, age 87, died Wednesday, January 9, at Addison Gilbert Hospital, Gloucester, Mass., following a stroke. Bill was the kindest and gentlest of men, a true Kentucky gentleman. He was born December 14, 1931, in Huntsville, Alabama, to the Rev. Edgar E. and Christine (Rockett) Houghton, and soon moved with his family to Anchorage, Ky., where he grew up. He was a graduate of Centre College, Danville, Ky., and the University of Kentucky, and was a Korean War veteran, serving in Army Intelligence in Germany and Turkey. In 1958, he married Diane M. Murley, at Anchorage Presbyterian Church, where his father was pastor for 37 years. Bill knew from an early age that he wanted to spend his career serving others and chose to become an educator. He was a social studies teacher and principal in Jefferson County, Ky., public schools for 27 years. Upon “retiring,” Bill and Diane embarked on new careers and adventures in Danville, where Bill was Assistant Superintendent of schools; Chicago, Ill., where he was Director of the Shore School for disabled children; and Brooklyn, N.Y., where he worked with disabled adults through Catholic Charities. He and Diane returned to Louisville, Ky., where they were active and beloved members of Central Presbyterian Church, and most recently moved to Rockport, Mass., to be with their daughter, Becky, and her family, and were embraced by the congregation of First Parish Church, Manchester-by-the-Sea, Mass. These travels brought many deep and abiding friendships, people drawn to Bill by his warmth, humor, and strength of body and spirit. He is survived by his beloved wife of 60 years, Diane; daughter Rebecca Shrimpton, of Rockport; son, Adam, of Mesa, Ariz.; sister Jane Snowden, of Danville; grandsons Joshua, Samuel and Benjamin; granddaughters Jamie, Katheryn, Abigail, and Lauren; and great-grandsons Skyler and Dallas.
Visitation will be Saturday, January 12, 2 to 4 p.m., at First Parish Church, Chapel building, 1 Chapel Lane, Manchester-by-the-Sea. Online condolences can be shared at www.pikenewhall.com/obituaries.
Published on January 11, 2019
To plant a tree in memory of William "Bill" Rockett Houghton, please visit Tribute Store.

A place to share condolences and memories.
The guestbook expires on April 10, 2019.