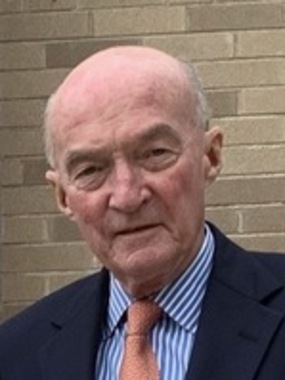 Chestnut Hill - Lynch, William Henry of Chestnut Hill passed peacefully on Monday September 2, 2019, with family by his side at the age of 76.
Beloved husband of Nancy B. Lynch. Loving father of George W. Lynch II, Martha L. Kopanon and Matthew N. Lynch. Grandfather of six dear grandchildren, Ava M. Lynch, John W. Lynch, Camilla J. Kopanon, Jasper M. Kopanon, Brooke T. Lynch and Aria S. Lynch. Brother to Margaret B. Pearson, Marietta E. Lynch and the late Michael F. Lynch and Nicholas F. Lynch. Son of the late Dr. George W. Lynch and Margaret F. Lynch. He is also survived by his great-aunt, Doris T. Lynch. "Bill" was an active member in many communities important to him. Bill was a member of the Belmont Hill School Corporation and former member of the Board of Trustees. He was also a former member of the Board of Trustees of the Cape Ann Museum, Gloucester and Gore Place, Waltham.
A Memorial Mass will be held on Tuesday September 10 at 11 a.m. in St. Theresa of Avila Church, 2078 Centre Street, West Roxbury. Interment private. A reception will follow the Memorial Mass. In lieu of flowers, gifts in memory of William H. Lynch may be made to the Massachusetts General Hospital in support of the Cancer Outcomes Research Program. Gifts can be made online at https://giving.massgeneral.org/donate or mailed to the MGH Development Office, attention: Carrie Powers, 125 Nashua Street, Suite 540, Boston, MA 02114 or The Belmont Hill School, 350 Prospect Street, Belmont, MA 02478. For guestbook, please visit gormleyfuneral.com.
Published on September 7, 2019
To plant a tree in memory of William Henry Lynch, please visit Tribute Store.

A place to share condolences and memories.
The guestbook expires on December 04, 2019.